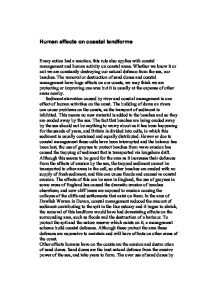 Human effects on coastal landforms Every action had a reaction, this rule also applies with coastal management and human activity on coastal areas. Whether we know it or not we are constantly destroying our natural defence from the sea, our beaches. The removal or destruction of sand dunes and coastal management have huge effects on our coasts, we may think we are protecting or improving one area but it is usually at the expense of other areas nearby. Sediment starvation caused by river and coastal management is one effect of human activities on the coast. The building of dams on rivers can cause problems on the coasts, as the transport of sediment is inhibited. This means no new material is added to the beaches and so they are eroded away by the sea. ...read more.

In the area of Dawlish Warren in Devon, coastal management reduced the amount of sediment contributing to the spit in the Exe estuary and it began to shrink, the removal of this landform would have had devastating effects on the surrounding area, such as floods and the destruction of a harbour. To protect the spit and the nature reserve which exists on it, a management scheme build coastal defences. Although these protect the area these defences are expensive to maintain and will have effects on other areas of the coast. Other effects humans have on the coasts are the erosion and destruction of sand dunes. Sand dunes are the best natural defence from the erosive power of the sea, and take years to form. The over use of sand dunes by leisure activities can lead to their destruction. ...read more.

It will also interfere with longshore drift, which will prevent the maintenance of beech landforms such as spits. During the 18th and 19th centuries shingle from Spurn Head spit in the Humber estuary was used by whalers as ballast, leaving only sand, which was easily eroded by the wind and sea, due to the lack of sediment the split was weakened and during a storm the spit broke and the surrounding area was flooded. This is a prime example that human coastal management is dangerous. We as a people do not yet know the full reaction of our actions, and small change on an estuary may not only affect Britain but possibly Europe, and before we try to counter act nature or our own mistakes, we need to find a better understanding of coastal geology and what effects our management has on our country. ...read more.