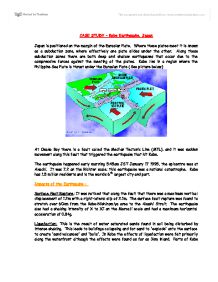 Japan is positioned on the margin of the Eurasian Plate.  Where these plates meet it is known as a subduction zone, where effectively one plate slides under the other.  Along these subduction zones there are both deep and shallow earthquakes that occur due to the compressive forces against the meeting of the plates.  Kobe lies in a region where the Philippine Sea Plate is thrust under the Eurasian Plate (See picture below) 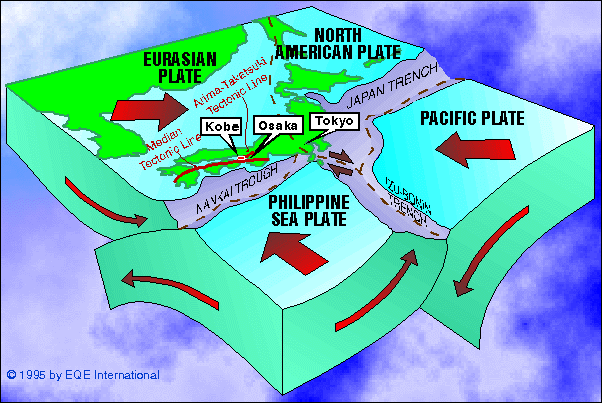 At Osaka Bay there is a fault called the Median Tectonic Line (MTL), and it was sudden movement along this fault that triggered the earthquake that hit Kobe.

The earthquake happened early morning 5:45am JST January 17 1995, the epicentre was at Akachi.  It was 7.2 on the Richter scale; this earthquake was a national catastrophe.  Kobe has 1.5 million residents and is the worlds 6th largest city and port.

Impacts of the Earthquake :

Surface Fault Rupture: It was noticed that along the fault that there was a maximum vertical displacement of 1.2m with a right-lateral slip of 2.1m.  The surface fault rupture was found to stretch over 60km from the Kobe-Nishinomiya area to the Akashi Strait.  The earthquake also had a shaking intensity of X to XI on the Mercalli scale and had a maximum horizontal acceleration of 0.84g.

Liquefaction:  This is the result of water saturated sands found in soil being disturbed by intense shaking.  This leads to buildings collapsing and for sand to 'explode' onto the surface to create 'sand volcanoes' and 'boils'.  In Kobe the effects of liquefaction were felt primarily along the waterfront although the effects were found as far as 3km inland.  Parts of Kobe were built on reclaimed land as well as artificial islands.  These were constructed using various sands as well as decomposed granite.  Due to the nature of these materials it is made very easy for liquefaction to take place if it was not compacted well enough.

Lateral spreading was found to be responsible for the lateral ground movement of 2-3m in the region resulting in structural damage especially to the port side buildings and walls.  The damage inflicted by this resulted in the majority of the port shutting down

Total damage was estimated at almost 10000 billion Japanese Yen (£64 billion).  All this damage was the result of just 20 seconds of earthquake.

1,100 shelters included community centers, schools, and other available and undamaged public buildings were set up and used for those who had lost their own homes. Due to facilities and shelters being too few there was severe crowding causing sanitation problems and increased risk of communicable disease. Indeed, two weeks after the earthquake, reports of influenza and pneumonia were common.

Food, water for drinking and sanitation, blankets, and warm clothing were in short supply for at least the first few days after the earthquake.

By Friday, January 20, both official and volunteer efforts to supply the basic needs of the impacted area were becoming increasingly evident. Corporations and other non-governmental organizations donated goods, and transportation was provided by both business and government vehicles. In some cases, normal production schedules and processes were modified to assist in the relief effort. They were also supported by encouragement and aid from friends across Japan and throughout the world, Co-op Kobe was able to take immediate action as an organization rooted in the community. Even though many of the executives and staff members of Co-op Kobe were disaster victims themselves, they rushed to stores in order to provide suffering residents with food and commodities. Co-op Kobe also mobilized its trucks, which ordinarily deliver merchandise to HAN groups, to provide relief aid to all corners of the disaster-struck area.

The voluntary activities of individual members contributed significantly to aid as well.

Another example of closer co-operation is the campaign that solicited signatures from individuals demanding a "Nationwide Security System for Natural Disasters." The campaign was carried out to support disaster victims to reconstruct their homes.

Hyogo Prefecture and Kobe City adopted restoration plans that complemented national policies, prioritizing projects that would stabilize the economy and attract new businesses.  17 restoration promotion districts were initially established.  At least $50 billion was invested by Japan’s national government to rebuild public facilities and infrastructure.  Public projects generally had 50% funding from the national government, and 50% funding from the cities or government.

Land readjustment projects were established in heavily damaged areas where plans called for the shifting of property rights and boundaries to allow for future road widening projects, open spaces and other public facilities. National funds covered construction costs for these kinds of public infrastructure, but not for housing reconstruction in these areas.


Urban redevelopment projects involved the total purchase of properties in a damaged area.  In Kobe, previously established redevelopment plans, with locations targeted for housing, commercial, office complexes, and new roads, helped guide reconstruction decisions. Some of these redevelopment project areas have been highly successful, with new housing being sold at a premium price.

Kobe City’s Emergency Three-Year Plan for Housing Reconstruction (released months after the earthquake) called for the construction of 82,000 units.  When the plan was issued, an estimated 10,000 units were already under construction and considered in the plan count.  Repair and reconstruction needs far exceeded individual resources for rebuilding. More than 30,000 businesses and households were rebuilt with grants and loans, backed by various government agencies.

The best materials to build with in order to withstand the earthquake would be concrete and steel.

Preparedness and emergency response is often the most affordable thing to do.  Efforts are needed to:

* Continue and increase support for emergency awareness and response, at all levels, public and private.

Overall and since the 1995 earthquake there seems to have been no problems with buildings collapsing and other problems due to earthquakes, this suggests that the management and action that the people of Kobe, Japan made was successful.