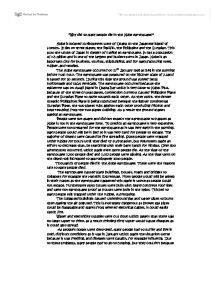 why did so many people die in the kobe earthquake

"Why did so many people die in the Kobe earthquake?" Kobe is located 32 kilometres west of Osaka on the Japanese island of Honshu. It lies on three plates; the Pacific, the Philippine and the Eurasian. This puts the whole of Japan in danger of having an earthquake. It has a population of 1.5 million and is one of the largest and busiest ports in Japan. Kobe is an important city for business, tourism, shipbuilding, and for manufacturing steel, rubber, and textiles. The Kobe earthquake occurred on 17th January 1995 at 5:46 in the morning before rush hour. The earthquake was measured on the Richter scale of 7.2and it lasted for 20 seconds. During this time the ground was moved 18cm horizontally and 12cm vertically. The earthquake occurred because the epicentre was on Awaji Island in Osaka Bay which is very close to Kobe. Plus, because of the three crustal plates, convection currents caused Philippine Plate and the Eurasian Plate to move towards each other. ...read more.

The collapsed buildings caused underground gas and water pipes to burst open making the air polluted. This is extremely dangerous as broken gas pipes could be flammable and sparks from severed electrical cables, it could easily catch fire. Water and electricity supplies were cut down which meant that there was no clean water to drink, as a result drinking dirty water would cause diseases as it could also spread. As people's homes were destroyed, many people had to suffer and live in cold, difficult conditions as it was in January which made the situation worse because it was freezing, and diseases were caught, for example influenza. Due to these problems, many people had to go to hospital, but they couldn't because of two main reasons. Firstly most hospital were collapsed, this meant that there was a lack of medical supply. Secondly because of collapsed buildings and rubble blocking roads, people could not commute. In addition, the deficiency of water supply also meant that it was difficult for people to put out fires. ...read more.

The fact it was in the middle of January caused a big effect on the number of deaths. People died from freezing conditions and the outbreak of influenza and other diseases. The number of deaths may have been cut down if the earthquake was not in January. The fact the Kobe earthquake was in the middle of January, which made it difficult for people. Homes were lost so people had nowhere to sleep at night and it would have been freezing. This is what caused a number of deaths. However if the earthquake had been in the summer it would have saved lives. As Japan is a rich country. It is one of the most advanced in technology country in the world. They have learnt to build strong, seismic design (earthquake- proof) houses and buildings, so that they are prepared for earthquakes in the future. These buildings have structures which are computer controlled and adjust to the earth's movement. The Japanese work out how to spend money when buildings are lost in an earthquake. They know now what to expect and what to do in the next earthquake, more than they did before. ...read more.