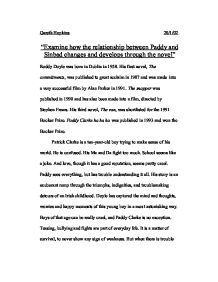 &amp;#147;Examine how the relationship between Paddy and Sinbad changes and develops through the novel&amp;#148;

Gareth Hopkins 20/1/02 "Examine how the relationship between Paddy and Sinbad changes and develops through the novel" Roddy Doyle was born in Dublin in 1958. His first novel, The commitments, was published to great acclaim in 1987 and was made into a very successful film by Alan Parker in 1991. The snapper was published in 1990 and has also been made into a film, directed by Stephen Frears. His third novel, The van, was shortlisted for the 1991 Booker Prize. Paddy Clarke ha ha ha was published in 1993 and won the Booker Prize. Patrick Clarke is a ten-year-old boy trying to make sense of his world. He is confused. His Ma and Da fight too much. School seems like a joke. And love, though it has a good reputation, seems pretty cruel. Paddy sees everything, but has trouble understanding it all. His story is an exuberant romp through the triumphs, indignities, and troublemaking detours of an Irish childhood. Doyle has captured the mind and thoughts, worries and happy moments of this young boy in a most astonishing way. Boys of that age can be really cruel, and Paddy Clarke is no exception. Teasing, bullying and fights are part of everyday life. It is a matter of survival, to never show any sign of weakness. ...read more.

A few days later, Paddy and Sinbad are out with their friends and Paddy tries to put lighter fuel in Sinbad's mouth. This is the first real instance that we see Paddy bullying Sinbad in front of his friends to increase his popularity. Sinbad refuses to swallow the lighter fuel and Paddy feels embarrassed about this, so he reverts to violence in order to control him. "This was terrible; in front of the others, I couldn't sort out my little brother. I got the hair above his ear and pulled it up; I lifted him." Paddy wants to hurt Sinbad so he looks good in front of his friends and tries to increase his own popularity by committing such acts. Nothing much happens concerning their relationship in the next twenty-odd pages, but then Paddy shows how much he cares about Sinbad during a meal one night. Sinbad is not eating his food, and his Da shouts at him. His da then says "I'm going in now to read my paper. And if that plate isn't empty by the time I come back I'll let you have what for." Paddy realises that Sinbad is not going to eat his food, and so he helps Sinbad out. "It was empty; in me and in the bin." ...read more.

Again, however, Paddy's relationship with sinbad is reinforced when their Da hits them with a belt for misbehaving. Sinbad is crying upstairs. Paddy goes upstairs, and when Sinbad sees him he calms down. "He was crying. When he saw it was me he slowed down." This is one of the moments when they genuinely care for each other and it almost feels as if they would do absolutely do anything for each other. Sinbad agrees with Paddy here to try and make Paddy like him more. Later on in the novel, towards the end, Paddy becomes confused about his own relationship with Sinbad and is unsure whether he likes him or not. "Why did people not like each other? I hated Sinbad. But I didn't" He is quite confused here, sometimes he hates Sinbad, but other times he likes him. Deep down, although he doesn't show it very often, Paddy loves Sinbad. He can't imagine being with out Sinbad and when he imagines what life would be like without Sinbad, he cries. "I loved Sinbad." Throughout the novel, even though they have their ups and downs, they care deeply for each other and would be lost without each other. The splitting up of Ma and Da brings them closer together and they seek comfort in each other. ...read more.