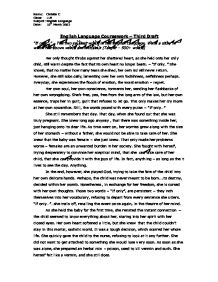 English Language Coursework - Third Draft "If only..." - The two saddest words in the English Language. Write a story in which the above words are included. [Target - 500+ words] Her only thought throbs against her shattered heart, as she held onto her only child, still warm despite the fact that its own heart no longer beats. - "If only..." She knows, that no matter how many tears she shed, her own kid will never return. However, she still sobs daily, lamenting over her own foolishness, selfishness perhaps. Everyday, she experiences the floods of emotion, the worst emotion - regret. Her own soul, her own conscience, torments her, sending her flashbacks of her own wrongdoing. She's free, yes, free from the long arm of the law, but her own essence, traps her in guilt, guilt that refuses to let go. ...read more.

In fact, anything - as long as the it lives to see the day. Anything. In the end, however, she played God, trying to take the fate of the child into her own delicate hands. Perhaps, the child was never meant to be born...its destiny, decided within her womb. Nonetheless, in exchange for her freedom, she is cursed with her own thoughts. Those two words - "If only", are persistent - they inch themselves into her vocabulary, refusing to depart from every sentence she utters. "If only..."...she trails off, recalling the event once again, in the theatre of her mind. As she held the baby for the first time, she resisted the instant connection - the child seemed to know everything about her, staring into her spirit with her closed eyes. ...read more.

Those beads of sadness mixed with the streams of blood, which soaked her severed wrist as she kneeled on the floor. She knew that she could only forgive herself through her own dead body. A life for a life, which is the mortal rule. As she slowly lost her consciousness, she felt more and more at peace. Her last breath signified the forgiveness of her soul, the release from her sin. The authorities turned up eventually. The news of her death splashed all over the papers, with twisted stories and revelations overshadowing the truth. By then, she had already left the world for good, to perhaps reunite herself with her child. They found drowned in her own pool of blood, where she laid limp with her arms to her side. Those arms, hopefully, shall embrace the child on the other side. Name: Christin C Class: 11M Subject: English Language Date: 10th March 2002 ...read more.