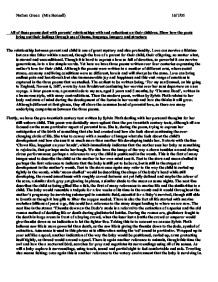 All of these poems deal with parents' relationships with and reflections on their children.Plath, Broadstreet, Hood

All of these poems deal with parents' relationships with and reflections on their children. Show how the poets bring out their feelings through use of theme, language, imagery and structure The relationship between parent and child is one of great mystery and also profundity. Love can survive a lifetime but can also falter within a second, though the love of a parent for their child, their offspring, no matter what, is eternal and unconditional. Though it is hard to express a love so full of devotion, so powerful it can survive generations, in to a few simple words. Yet here we have three poems written over four centuries expressing the author's love for their child. Although the poems were written in a number of different eras, where social stance, economy and living conditions were so different, love is and will always be the same. Love can bring endless pain and heartbreak but also immeasurable joy and happiness and this vast range of emotions is captured in the three poems that we studied. The earliest to be written being, 'For my son Samuel, on his going to England, Novem 6, 1687, wrote by Ann Bradstreet confessing her worries over her sons departure on a sea voyage. A later poem was, a parental ode to my son, aged 3 years and 5 months, by 'Thomas Hood', written in a humorous style, with many contradictions. Then the modern poem, written by Sylvia Plath relates to her body and state of mind during the development of the foetus in her womb and how she thinks it will grow. Although different at first glance, they all share the common bond of parental love, so there are many underlying comparisons between the three poems. Firstly, we have the pre-twentieth century text written by Sylvia Plath dealing with her personal thoughts for her still-unborn child. This poem was decidedly more upbeat than the pre twentieth century texts, although all are focused on the same particular aspect of parental love. ...read more.

While Sylvia Plath made many referrals to water and marine based life, Thomas hood makes many references to other worldliness, perhaps suggesting that a baby is actually something magical as this is the feeling most parent get when they take their place in the great continuity of life. The baby is labelled tricksy puck, a character from Shakespeare's 'A midsummer nights Dream'. This character was a small very mischievous creature, the chief elf that turned one of the plays main characters into a donkey, this is showing that the father loves his son for his playful nature. Each Stanza starts alternate lines rhyming, followed by rhyming couplets and a rhyming triplet at the end. This is very different to the more modern poem as that was more focused on building image and relaying feelings rather than having any particular rhyming scheme. It is obvious that this poem was written pre 20th century because of the use of archaic language particularly in the title and occasionally in the poem itself, hence the words 'sire' meaning father and 'ode', a lyrical poem, often an emotion wrought dedication, though another humorous aspect of this poem is the many contradictions throughout. The child is also said to be wearing a pinafore, this was the usual in the 1800's as both genders wore similar clothes at such a young age. Throughout both poems new images come with almost every line, many of which produce a similar images to one another. For instance Thomas Hood describes his son as being unsoiled by sin, this is very similar to Sylvia Plath's mention of being the child being a clean slate with your face on. Both parents realise their child will have temptations in life but that they will hopefully overcome these and act with individuality. During the second stanza the child is referred to as a cherub, an angelic being, tying in with innocence, an unblemished conscience and perhaps beauty. ...read more.

The first poem deals with the side every person expects when they have a child, the feeling of wholeness, of satisfying completeness yet the anticipation of stepping in to the unknown. This is the more pleasurable side of nurturing children, watching them grow, dreaming of the future, hearing their ambitions yet reality as with most aspects of life is very different. Children's curiosity is an essential part of life when developing, at the age of three we begin to develop the distinction between what is right and wrong. This is what Thomas Hood deals with in his poem, despite realising the difficulty in raising his son, he is still heaping praise upon him, showing that maybe when it comes to children, love maybe indeed, blind. This poem shows that of course children need parental guidance for many years of there life but as we see in 'Upon my son Samuel' there comes a time when a child has to leave the nest and their parents protective love in order to achieve full fulfilment. This poem also gives the reader the an idea of the unbearable pain felt when having to let a part of you leave, I'm sure every parent must also feel some sort of pride in this situation, though in Ann Bradstreet's poem any other emotion that she may be feeling is masked by her grief. Each poem was clearly written in a different era with the modern one more flowing and the earlier two, sticking to a particular rhyming scheme. The use of archaic language in the pre-twentieth century poems, I believe add a sense of clarity even in thee humorous ode. Yet despite the time difference all of the poems written and those that will be written in the future on this subject, will contain a line or perhaps more that certainly comes from the heart and speaks clearly to all generations.. ?? ?? ?? ?? Nathan Green (Mrs Bonsall) 16/7/05 ...read more.