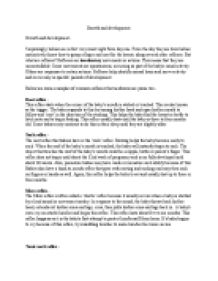 ﻿Growth and development. Growth and development - Surprisingly, babies are in fact very smart right from day one. From the day they are born babies instinctively know how to grasp a finger and root for the breast, along several other reflexes. But what are reflexes? Reflexes are involuntary movements or actions. This means that they are uncontrollable. Some movements are spontaneous, occurring as part of the baby's usual activity. Others are responses to certain actions. Reflexes help identify normal brain and nerve activity and occur only in specific periods of development. Below are some examples of common reflexes that newborns are prone too - Root reflex - This reflex starts when the corner of the baby?s mouth is stoked or touched. This is also known as the trigger. ...read more.

Babies also have a hand-to-mouth reflex that goes with rooting and sucking and may then suck on fingers or hands as well. Again, this reflex helps the baby to eat and usually last up to three or four months. Moro reflex - The Moro reflex is often called a ?startle? reflex because it usually occurs when a baby is startled by a loud sound or movement nearby. In response to the sound, the baby throws back his/her head, extends out his/her arms and legs, cries, then pulls his/her arms and legs back in. A baby's own cry can startle him/her and begin this reflex. This reflex lasts about five to six months. This reflex happens as it is the baby's first attempt to protect him/herself from harm. If a baby begins to cry because of this reflex, try swaddling him/her to make him/her feel more secure. ...read more.

This is a normal reflex up to about 2 years of age. Babies have this reflex as an attempt to protect against falling. Step reflex - Finally the step reflex. This reflex is also called the walking or dance reflex because a baby appears to take steps or dance when held upright with his/her feet touching a solid surface. This reflex stops after two months but then reappears a couple of months later when the baby is learning to walk. Development is split into four main categories. These are - - physical - intellectual - emotional - social We recognise these groupings as PIES. But there are also two strands to physical development. To start off with, growth means the increased weight and size of a baby whereas development is how a baby gains skills in order to control their actions their body creates. FINISH THIS.. INCLUDE SKILLS THEY LEARN ...read more.