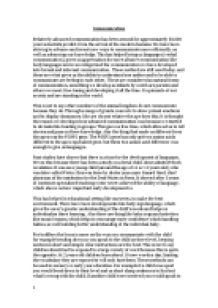 ﻿Communication Relatively advanced communication has been around for approximately 50,000 years scientists predict, from the arrival of the modern humans. We have been striving to advance and invent new ways to communicate more efficiently, as well as advancing our knowledge. This has helped bring us languages (verbal communication), given us appreciation for more allusive communication like body languages and even categorised the communication we have developed into formal and informal communication. These method are still used today, and these are what gives us the ability to understand one anther and to be able to communicate are feeling to each other. These are considered as natural forms of communication, something we develop as infants by watch are parents and others we meet, fine-tuning and developing it all the time. It a pinnacle of our society and are standing in the world. This is not to say other members of the animal kingdom do not communicate because they do. Through a range of grunts, roars etc to show primal emotions and to display dominance, like are closest relative the ape does this. ...read more.

At 2 years old children learn about 10 new words a day, limiting the vocabulary they are exposed to will only hurt them. These methods can be used in nursery or early year education. For example if a child was upset you would bend down to their level and us short sharp sentences to find out what?s wrong with the child. If another child were involved you would speak to them in the same manor. Most parents use things like ?the naughty? step which communicates there unhappiness with the child and is a form of punishment but this is controversial because some say it humiliate the child into submission. Methods like this have been popularised by television shows like supper nanny, which witch is about unruly children and their parents learning have to decupling them. Babies up to the age of one are the most adapted at learning because at this time their brains are like sponge, and very adaptable. In cases where the baby brain was damaged some children manage to re-route abilities that was lost to the undamaged part of the brain. ...read more.

This is the same as calling someone, most people have mobiles which are a lot more reliable then the house phones as these are usually kept on a person most of the day. Email is another reliable way of communicating because now most mobiles have emails built in, which takes away the need for a computer. Technology also helps in diagnosing patient now, the usual mandatory journey top the GP is even being impacted, because of programs like embarrassing bodies live chat. There are also things on the Internet that helps self diagnose. It is always advised to go to the doctor but these ways may revolutionise the health care system. There are many ways to communicate and all impact health and social care sometimes in unforeseen ways. Communication is the key to the successes of are species and helps carers care for people. Of course need to have communication skills, which are; 1. Being able to listen carefully and understand what someone is trying to say. 2. Knowing how to ask questions effectively. 3. Understanding different cultures and peoples cultural differences. 4. Being able to understand and using non-verbal communication. Without someone being able to do these things the rest are worthless. ...read more.