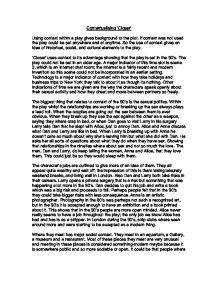 Contextualising 'Closer' Using context within a play gives background to the plot. If context was not used the play could be set anywhere and at anytime. So the use of context gives an idea of historical, social, and cultural elements to the play. 'Closer' uses context to its advantage showing that the play is set in the 90's. The play could not be set in an older age. A major indicator of this time slot is scene 3, which is an Internet chat room; the Internet is a fairly recent and modern invention so this scene could not be incorporated in an earlier setting. Technology is a major indicator of context with how they take holidays and business trips to New York they talk to about it as though its nothing. Other indications of time we are given are the way the characters speak openly about their sexual activity and how they cheat and move between partners so freely. The biggest thing that relates to context of the 90's is the sexual politics. ...read more.

They all appear quite wealthy and well off, the impression of this is them taking leisurely weekend breaks, and living well in London. Also Dan and Larry both take risks in their careers. Larry opens a private surgery that is a risk but something that was happening a lot more in the 90's. Dan decides to quit his job and write a book which was a big risk and proceeds to fail. Perhaps people felt that in the 90's they could take bigger risks with less consequence. Anna is an artistic photographer. Photography in the 80's was perhaps not such a recognized art, but in the 90's it is accepted enough to have an exhibition and a book printed about it. This shows that in the 90's people are more open minded. Alice never really seems to have a job throughout the play; the only job we know Alice has had and has is as a stripper. In London during the 90's, strip clubs where seen around more and were starting to be accepted as a modern thing. ...read more.

Smoking is mentioned a lot in the play because smoking was something that was advertised and marketed by press and celebrities. This caused practically everyone in the 90's to do it. Smoking had been discovered to be bad for you long before the 90's, people where starting to take note of this fact as the characters give up and take up smoking freely between scenes. Smoking has social context, and also giving up is a major cultural thing in the play. In conclusion we are watching a Microcosm a small part of the London, capturing the lives of four people. The four of them are juxtapositions; we are told in stage directions that they are all from different places. Country, town, suburbs and city and they are all different ages, so it shows the social context of four completely different people being thrown together and watching their behavior and relationships grow in a modern and changing world. Marber is trying to give us an insight into what is happening in the real world around us things that happen every day and we don't notice they are happening. Mike Cope ...read more.