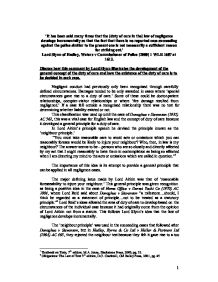 'It has been said many times that the [duty of care in the] law of negligence develops incrementally so that the fact that there is no reported case succeeding against the police similar to the present one is not necessarily a sufficient reason for striking out.' Lord Slynn of Hadley, Waters v Commissioner of Police [2000] 1 WLR 1607 at 1613. Discuss how this comment by Lord Slynn illustrates the development of the general concept of the duty of care and how the existence of the duty of care is to be decided in each case. Negligent conduct had previously only been recognised through carefully defined circumstances. Damages tended to be only awarded in cases where 'special circumstances gave rise to a duty of care.' Some of these could be doctor-patient relationships, occupier-visitor relationships or where 'fire damage resulted from negligence.' If a case fell outside a recognised relationship there was no test for determining whether liability existed or not. This classification was used up until the case of Donoghue v Stevenson (1932) AC 562, this was a vital case for English law and the concept of duty of care because it developed a general principle for a duty of care. In Lord Aitkin's principle speech he devised the principle known as the 'neighbour principle.' "You must take reasonable care to avoid acts or omissions which you can reasonably foresee would be likely to injure your neighbour? Who, then, in law is my neighbour? ...read more.

AC 605. Lord Dickman identified a distinction between the two approaches that have been used to identify a duty of care. The first was the approach used prior to the decision made in Donoghe v Stevenson that he called the 'traditional approach- where the law finds the existence of the duty [of care] in different specific situations each exhibiting its own particular characteristics.'5 The second approach was developed in the decision in Anns6 and Home Office v Dorset Yacht Co. This was based on the idea of the 'more modern approach of seeking a single general principle which may be applied in all circumstances of a duty of care.'7 In the Australian case of Sutherland Shire Council v Heyman (1985) 60 ALR 1, Brennan J had a similar view to that of Lord Slynn, 'the law should develop novel categories of negligence incrementally.' This approach developed the idea of an incremental idea towards duty of care and the existence of it, instead of the broad general principles developed through Anns8 and Donohue v Stevenson. By developing an incremental approach it would allow judges to see what particular category the case fell into and then develop the rules in this area. This idea means that the individual facts of a case are looked at and then the judges can develop this area to find a judgement for that particular case rather than looking at the whole case and finding preceding cases to return a judgement. ...read more.

Throughout this essay the majority of points identified have led to the facts of each case being looked at individually, but in this case by looking the facts as a whole sequence shows how and when a duty of care should be owed. '...Whilst I accept that many of the individual items taken in isolation are at the least very unlikely to have caused the illness alleged, the plaintiff's case puts much emphasis on the cumulative effect of what happened.'10 As this essay has shown there have been various means of trying to establish a duty of care, a principle that may work in one case may be too strict or too lenient in another, this means that judges are constantly having to broaden and narrow guidelines for duty of care. This shows how important the incremental approach is, by allowing a judgement to be given on the individual facts of a case rather than following precedent as it allows the most appropriate judgement to be decided upon. In order to keep the law within a sensible framework, there are three factors that are employed, firstly the loss must be reasonably foreseeable, there must be a relationship of proximity between the plaintiff and the defendant and thirdly the liability for harm that has occurred must be 'just and reasonable'. The necessary points vary from case to case but the one thing that courts are looking for is a relationship of proximity, it may not be universally applied but can be applied within context of the individual facts of the case in question. ...read more.