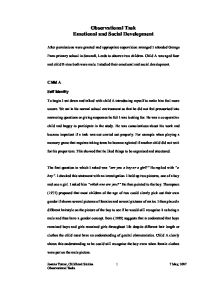 Observational Task Emotional and Social Development After permissions were granted and appropriate supervision arranged I attended Grange Farm primary school in Seacroft, Leeds to observe two children. Child A was aged four and child B nine both were male. I studied their emotional and social development. Child A Self Identity To begin I sat down and talked with child A introducing myself to make him feel more secure. We sat in his normal school environment so that he did not feel pressurised into answering questions or giving responses he felt I was looking for. He was a co-operative child and happy to participate in the study. He was conscientious about his work and became impatient if a task was not carried out properly. For example when playing a memory game that requires taking turns he became agitated if another child did not wait for his proper turn. This showed that he liked things to be organised and structured. The first question in which I asked was "are you a boy or a girl?" He replied with "a boy". I checked this statement with an investigation. I held up two pictures, one of a boy and one a girl. ...read more.

Although 4-year-old children do not like adults to interfere they still turn to them for advice, approval or material help, (Brian, J., Martin. M. D. (1995)). I asked child A if he liked his teacher, he replied "yes, were allowed to play in the shoe shop". This appeared to show a good relationship with his teacher. He seemed to open up and show his true personality within his peer group. When with the teacher he could be very quiet, however when he was among peers he would be very dominant and talkative. Children at this age tend to act as individuals within their peer groups (Brian, J. Martin. M.D. (1995). Emotional development I talked to child A about his feelings and the different emotions he felt. "What makes you angry?" "Mmm, (sighs) when I have to do writing" "Why does that make you angry?" "I can't do it" "When do you feel happy?" "When it's play time" " Why do you enjoy playtime?" " Cos me and Nathan can play out" "Do you enjoy playing with your friends" "Yes, it's fun" "Do you play with your brother Ryan?" "I don't like to" "Why do you not like playing your brother?" ...read more.

"Yes, sometimes I have to make new friends because no one will play with me" "Is there anything that makes you sad?" "Having no one to play with and being shouted at, I try to make friends when I haven't got any" "Does anything make you scared?" "I get scared when I have to do work I can't do" "Why does that make you scared?" "I might get shouted at" Comparison's between Child A and B. Child B seemed to be rejected by his peers slightly more than child A. He does not seem to be as domineering. This may be a personality difference rather than age. Child B tends to interact with peers due to qualities such as kindness, whereas child A prefers to play with peers because they are playing a jigsaw or a game. This is a feature of his age and being more physically orientated. When I asked child A if he was a good boy he answered that his mum thought he was, whereas child B answered that he thought he was. This shows that child A tended to rely more heavily on what his mother thought. I found that both A and B clearly chose their own gender to interact with. Despite B being slightly clearer they know their own gender and they will be a boy throughout life. ...read more.