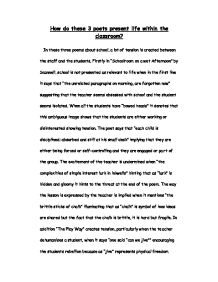 How do these 3 poets present life within the classroom?

How do these 3 poets present life within the classroom? In these three poems about school, a lot of tension is created between the staff and the students. Firstly in "Schoolroom on a wet Afternoon" by Scannell, school is not presented as relevant to life when in the first line it says that "the unrelated paragraphs on morning, are forgotten now" suggesting that the teacher seems obsessed with school and the student seems isolated. When all the students have "bowed heads" it denotes that this ambiguous image shows that the students are either working or disinterested showing tension. The poet says that "each child is disciplined; absorbed and still at his small desk" implying that they are either being forced or self-controlling and they are engaged or part of the group. The excitement of the teacher is undermined when "the complexities of simple interest lurk in inkwells" hinting that as "lurk" is hidden and gloomy it hints to the threat at the end of the poem. ...read more.

The teacher is depersonalise when it says that the "Teacher will play" signifying that it is as if the teacher is being controlled and forced into it by the use of a imperative. Similarly in "A snowy day in school" there is also a lot of pessimistic images, particularly by the use of alliteration when it says that "between the schools sweeps one black root" denoting a sense of desperation and the agonies of school by using the almost confusing repetition of "s" sounds. D.H. Lawrence describes "the soiled streets" portraying the negativity and decay of the image school. In addition there is also a lot of pessimism in "Schoolroom on a wet afternoon," especially when it says that the "rain falls as though the sky has been bereaved" suggesting an echo of death and rather than representing freedom the sky represents claustrophobia. In these poems the power of learning is emphasised, firstly in "A snowy day in school" when the teacher says that he must "call back a hundred eyes" suggesting that although the teacher is fearful of the students the class seems very focused. ...read more.

The hidden life of the classroom is presented differently in each of these poems. Firstly in "The Play Way" when the teachers "lesson notes read" it implies that the music lesson is not expressive but is simple and planned by use of this short sentence. It says that "its private spell behind eyes that stare wide," indicating the importance to the individual and that the experience is a personal one. In addition in "Schoolroom on a wet Afternoon" the hidden life of the classroom is presented as violent, especially when it mentions a "vicious rope, glaring blade, the gun cocked to kill" suggesting that the violence and threat of the child is expressed, also by using plosive sounds makes it seem more violent. When it mentions "the severed heads of kings rot by the misty Thames" it signifies that by using an opening list of history it links to the public executions, civil war all surrounding the young lives. Similarly in "A snowy day in school" it creates a hidden life of the classroom, particularly when it mentions the "irregular hum of the class" indicating an ideal image. ...read more.