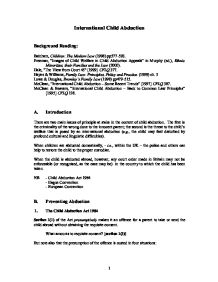 International Child Abduction Background Reading: Bainham, Children: The Modern Law (1998) pp577-593. Freeman, "Images of Child Welfare in Child Abduction Appeals" in Murphy (ed.), Ethnic Minorities, their Families and the Law (2000). Hale, "The View from Court 45" [1999] CFLQ 377. Hayes & Williams, Family Law: Principles, Policy and Practice (1999) ch. 5 Lowe & Douglas, Bromley's Family Law (1998) pp479-515. McClean, "International Child Abduction - Some Recent Trends" [1997] CFLQ 387. McClean & Beavers, "International Child Abduction - Back to Common Law Principles" [1995] CFLQ 128. A. Introduction There are two main issues of principle at stake in the context of child abduction. The first is the criminality of the wrong done to the innocent parent; the second is the threat to the child's welfare that is posed by an international abduction (e.g., the child may feel disturbed by profound cultural and linguistic difficulties). When children are abducted domestically, - i.e., within the UK - the police and others can help to restore the child to the proper custodian. When the child is abducted abroad, however, any court order made in Britain may not be enforceable (or recognised, as the case may be) ...read more.

[1990] 2 AC 562 (ii) Wrongfulness This concept is important because the Convention's provisions only apply to a `wrongful removal' or `wrongful retention'. Article 5 sets out the elements of wrongfulness. (iii) Removal and Retention These terms have been defined by the House of Lords in Re H, Re S [1991] 2 AC 476. Wrongful Removal is a single event involving the child being taken out of the country in which he or she is habitually resident . Wrongful Retention occurs when: (i) a child, initially taken out of the jurisdiction for a limited period, is subsequently held there beyond the period agreed by the parties, OR (ii) where the abductor declares his or her intention not to return the child at the end of the agreed limited period, OR (iii) if a court in the child's country of habitual residence makes an order granting custody rights to the other parent. (b) The Basic Mechanics of the Convention An application designed to secure the return of the child is made to one or other of the two Central Authorities under Article 8. This application discloses identification information about the abductor, the abductee and the place and person with whom the child is now believed to be. ...read more.

The applicant invokes the Convention in this respect in the same way that he would if he was seeking the return of a child. NOTE Re T (Minors) (Hague Convention: Access) [1993] 2 FLR 617 D. Non-Convention Abductions Here, there are two classes of children to consider: incoming abductees and outgoing abductees. 1. Children Abducted from Abroad Where a child is abducted from abroad, and brought to the UK, the question of the child's return is generally dealt with under the court's wardship jurisdiction (assuming the child and his family have sufficient connection with the UK for the court to be seised of jurisdiction). The relevant principles have evolved under the common law. Re F (Abduction: Jurisdiction) [1990] 3 All ER 97 Re JA (Child Abduction: Non-Convention Country) [1998] 1 FLR 231 2. Children Abducted from the UK Where a child is abducted from this country and taken to a non-Convention country, there is little by way of legal machinery to secure the child's return. The only prospects are either extradition of the abductor, or applying for an order from the English court if and when the abductor returns to the UK. JM/CL/V May 2003 4 1 ...read more.