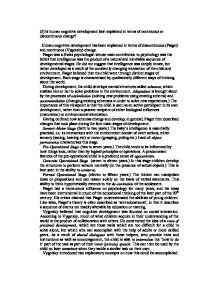 Is human cognitive development best explained in terms of continuous or discontinuous change?

(3) Is human cognitive development best explained in terms of continuous or discontinuous change? Human cognitive development has been explained in terms of discontinuous (Piaget) and continuous (Vygotsky) change. Piaget was a Swiss psychologist whose main contribution to psychology was the belief that intelligence was the product of a natural and inevitable sequence of developmental stages. He did not suggest that intelligence was simply innate, but rather developed as a result of the constantly changing interaction of the child and environment. Piaget believed that the child went through distinct stages of development. Each stage is characterised by qualitatively different ways of thinking about the world. During development, the child develops mental structures called schemas, which enables him or her to solve problems in the environment. Adaptation is brought about by the processes of assimilation (solving new problems using existing schema) and accommodation (changing existing schemata in order to solve new experiences.) The importance of this viewpoint is that the child is seen as an active participant in its own development, rather than a passive recipient of either biological influences (maturation) or environmental stimulation. Having outlined how schemas change and develop, in general, Piaget then described changes that took place during the four main stages of development: Sensori-Motor Stage (birth to two years.) ...read more.

the child and the helper) begin a risk with different levels of skill and understanding. As each adjusts to the perspective of the other, the helper has to translate their own insights in a way that is within the grasp of the child, and the child develops a more complete understanding of the task. Scaffolding refers to the way in which the support offered by a helper gradually decreases as the child assumes more of the strategic planning; and eventually gains the competencies to master similar problems without the aid of an adult or more knowledgeable peer. Vygotsky's theory has profound implications for classroom learning. Teachers guide, support and encourage children, yet also help them to develop problem-solving strategies that can be generalised to other situations. The role of expert peers is stressed in the Vygotskian approach. Co-operative learning symbolises the whole spirit of Vygotsky's approach to development, children learn best not when they are isolated, but when they interact with others, particularly with competent others who can provide the guidance and encouragement to master new challenges. The concept of developmental stages is often taken to mean that development is discontinuous. However, for Piaget, development is a gradual and continuous process of change, although later stages build on earlier ones (which is why the sequence is invariant.) ...read more.