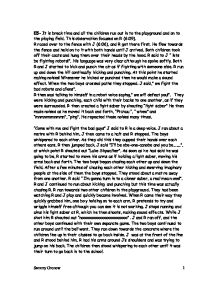 It is break time and all the children run out in to the playground and on to the playing field. This observation focuses on R (6:09).R raced over to the fence with J (6:06), and R got there first. He flew towards the fence

E5- It is break time and all the children run out in to the playground and on to the playing field. This observation focuses on R (6:09). R raced over to the fence with J (6:06), and R got there first. He flew towards the fence and held on to it with both hands until J arrived. Both children took off their coats and hung them over their heads by the hood. R said to J " lets be fighting robots!". His language was very clear although he spoke softly. Both R and J started to kick and punch the air as if fighting with someone else. R run up and down the hill continually kicking and punching. At this point he started making noises! Whenever he kicked or punched then he would make a sound effect. When the two boys crossed paths they stopped. J said," we fight the bad robots and aliens". R then was talking to himself in a robot voice saying," we will defeat you!". They were kicking and punching, each child with their backs to one another, as if they were surrounded. R then created a light saber by shouting "light saber" He then made noises as he moved it back and forth, "Ptchuu ", " whew" and "mnmnmnmnmmn", "ping". ...read more.

E6- A child between the ages of 6 and 8 years should/may:- * Have learned all basic skills needed for independence in hygiene, eating and toileting routines. * Be aware of gender characteristics - friendship groups are often separated by gender! * Behave appropriately in a variety of social situations! * Be influenced by the peer group (P.Tassoni, Diploma in Childcare and education) * Become influenced by a 'Hero' and they are used as role models by children at this age. * Have stable friendships * Be able to share, play and understand other's viewpoints * Be more aware of abilities * Loose confidence in certain areas e.g drawing, reading * Uses a broader repertoire of strategies including negotiation and compromise, to resolve conflicts before seeking adult help, although still has difficulty at times. (M. Beaver, Babies and young children) During my observation, I have been able to observe several areas of development. R also developed his imaginative development during this observation as he took part in pretend play. E7- During this observation, R has covered several of the developmental milestones for a child of his age! He is capable of having a stable friendship which he has with J and he can negotiate when playing, as he compromised with his friend over which characters they would both be. ...read more.

And that girls tend to gather in twos and share secrets. The observation is valuable as it covers social development well, due to the fact that other children joined in the game for a few minutes. E10- Throughout my observation I do not believe that it contains any stereotypical or discriminatory content towards the child, their family or the work setting. The two children have different skin colours! One child is indian and the other child is white! Neither child has a disability although if that had of been the case then maybe the game could have been played in the hall/ gym. This way a child with a wheelchair could of played and been safe! A level surface would make it a lot easier for a child with a wheelchair. A blind child could also of played the game if there was crash mats around in case the child tripped so they wouldn't hurt themselves. The staff and children at the setting are all very positive and the staff are at hand to assist any child that they can see struggling with a certain aspect of development. E11- Babies and young children, diploma in childcare and education, Marian Beaver, Jo Brewster, Pauline Jones, Anne Keane, Sally Neaum, Jill Tallack, Cheltenham, Nelson Thornes, 2001 Diploma in Childcare and education, P. Tassoni, K. Beith, H. Elderidge, A. Gough, Bath, Heinemann,2002 ?? ?? ?? ?? 1 Sammy Gronow ...read more.