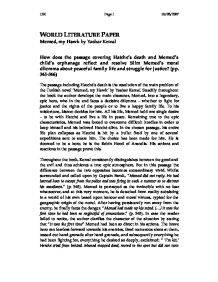 Memed, my Hawk by Yashar Kemal - How does the passage covering Hatche's death and Memed's child's orphanage reflect and resolve Slim Memed's moral dilemma about peaceful family life and struggle for justice?

WORLD LITERATURE PAPER Memed, my Hawk by Yashar Kemal How does the passage covering Hatche's death and Memed's child's orphanage reflect and resolve Slim Memed's moral dilemma about peaceful family life and struggle for justice? (pp. 345-346) The passage including Hatch�'s death is the resolution of the main problem of the Turkish novel 'Memed, my Hawk' by Yashar Kemal. Steadily throughout the book the author develops the main character, Memed, into a legendary, epic hero, who in the end faces a decisive dilemma - whether to fight for justice and the rights of the people or to live a happy family life. To his misfortune, kismet decides for him. All his life, Memed held one single desire - to be with Hatch� and live a life in peace. Remaining true to the epic characteristics, Memed was forced to overcome difficult hurdles in order to keep himself and his beloved Hatch� alive. In the chosen passage, his entire life plan collapses as Hatch� is hit by a bullet fired by one of several expeditions sent to snare him. The choice has been made for him. He is doomed to be a hero; he is the Robin Hood of Anatolia. His actions and reactions in the passage prove this. ...read more.

And this is proven here because no reader will have trouble imagining, for example, Memed firing shot after shot and Hatch� crying out her pain. Kemal also inserts short phrases as "Then, like an arrow, he ran to Hatch�'s side" (p. 345) in order to advance and facilitate the reader's understanding of all motion occurring. The tragic nature of the passage is also masterly displayed. The author has taken great care in expressing the subtle. "She lay on the ground, lifeless, the child beside her" (p. 345). It is also worthwhile noticing Kemal's syntax here since he forces the reader to slow down and read more precisely by extensive use of (,). This yields a sincerely emotional and dramatic reading experience. Another interesting phenomenon is Kemal's ability to portray two different sides of Memed within a margin of few words. First "This did not satisfy him and he began to hurl one grenade after another" and soon after "Memed sat with his gun on his knees, his head bent, weeping." (both p. 345) Without making the scene seem banal and disturbing the reading experience, Kemal splendidly manages to alter the reader's perception of Memed within 10 lines. In the reader's mind, Memed is transformed from being the brave and good western-like figure fighting for the right cause, to the sensitive and passionate lover, who weeps over his loss. ...read more.

This is the whole idea behind this novel. It is not only an epic work, but also a social document. "Memed came and took Iraz by the arm. The Child had stopped crying. For a long time he fixed his eyes on the child's face. 'Good luck'" (p. 346). Throughout the novel, Memed suffered as the poor victim of evil and then stood up, not only for himself, but also for his fellow villagers. Until this moment where he gives away his own child, his ultimate goal was to live happily with his Hatch� and their son. This passage is essential to the entire plot of the book, since Memed's life fundament dwindles here followed by Memed's decision to carry on the struggle for justice. However, was it Memed's decision? From a western European perspective perhaps it was, but from a Turkish perspective one might have the belief that Memed was doomed to continue his struggle. It was kismet, and not his choice. Thus this passage resolves Memed's dilemma, but it has become clear that the author seeked to display Memed as a passive figure and as the victim and hero of destiny. And so, Memed went on struggling. He completed his prescribed mission by killing Abdi Agha in his bed; nobody has heard of him again. He came as a hero, and disappeared like one. (Word Count: 1306 words) ?? ?? ?? ?? Emil Sierczynski Page 1 10/05/2007 ...read more.