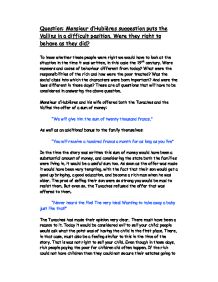 Monsieur d'Hubi&amp;egrave;res suggestion puts the Vallins in a difficult position. Were they right to behave as they did?

Question: Monsieur d'Hubi�res suggestion puts the Vallins in a difficult position. Were they right to behave as they did? To know whether these people were right we would have to look at the situation in the time it was written, in this case the 19th century. Were manners and codes of behaviour different from today? What were the responsibilities of the rich and how were the poor treated? Was the social class into which the characters were born important? And were the laws different in those days? These are all questions that will have to be considered in answering the above question. Monsieur d'Hubi�res and his wife offered both the Tuvaches and the Vallins the offer of a sum of money: "We will give him the sum of twenty thousand francs." As well as an additional bonus to the family themselves: "You will receive a hundred francs a month for as long as you live" In the time the story was written this sum of money would have ...read more.

This made it very easy for the rich to adopt children. On the other hand, the Vallins did except, the offer must have been too tempting for them, and/or they had seen the other side of the argument, from their son's point of view. The Tuvaches had forgotten about this. The Vallins probably thought that their son would prefer growing up in a rich environment, not having to work hard all day on the farm, and come home to: "A meagre diet of soup, potatoes and fresh air" The Vallins realised and admitted that they were poor, and would do well with the money they would get from the deal. They even went as far as attempting to rise the amount hey would get per month, and succeeded in doing so. "We'd need a hundred and twenty" The d'Hubi�res were so desperate for a son and an heir to their estate that they accepted straight away without hesitation. ...read more.

The Tuvaches could hear the cheering in their cottage, and were angry at how happy they were. Charlot - the Tuvaches son - now became angry with his parents, because they had not sold him! "'O' course I blame you. I blame you for being soft in the head. Parents like you is the reason why children get held back. It'd serve you right if I upped sticks and off." And that's exactly what he did. He packed his bags and left home, blaming his parents for holding him back in life. The moral of this story is telling people, especially parents to think of others, in this case your child and how much better it would be to sell him. Madame Tuvaches thought about herself and how good she would look for not being tempted by the money. The money was really just a bonus to having your son raised well in a rich environment. I think that the Vallins were right in selling their son to Monsieur d'Hubi�res and his wife. ...read more.