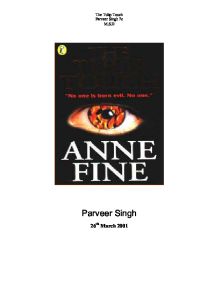 &quot;No one is born evil. No one.&quot;

Parveer Singh 26th March 2001 "No one is born evil. No one." Natalie lives with her parents and her little brother in the Palace Hotel that her father manages. She has a loving family (even though she sometimes feels neglected.) Her father is always busy with the hotel and her mother always seems so preoccupied with her little brother, Julius. Tulip lives on a farm near the hotel. The first day Natalie meets Tulip they become friends. Tulip is an "evil" girl who likes to stir up trouble. Tulip was a loner before she actually met Natalie as well. When Natalie met Tulip she was ok but as they were together things went really bad for Natalie. Tulip started to do horrible things and Natalie could not do a thing about it. Tulip was cruel to animals. Once when she was with Natalie and she lifted a rabbit out by the ears and after a while she practically threw the rabbit back on its straw and then she just turned away. ...read more.

Natalie is not very knowledgeable either. She is out of school rather than in school. Tulip practically dresses like a Tramp too. She always wears a worn jacket and she wears cheap clothes. But maybe it is not Tulips fault the way that she behaves. It maybe is all her dads fault that she acts this way. Tulip's father could be the one who is to blame. Maybe Tulip copies her dad by doing the things that he does, and the things that he does are very horrible and ruthless. The evil things that Tulip's dad has done, Tulip has done the same. Tulip's dad is cruel to animals and he is cruel to other people and he is even nasty to his own family. He always beats up Tulip and he beats up Tulip's mum. He probably beats up Tulip for then the mum could be involved to stop it and then could beat her up too. So maybe he beats up Tulip so he can beat up Tulip's mother (he uses Tulip.) ...read more.

So Natalie's father does not say anything to Natalie about not hanging around with Tulip because of that Tulip is a loner and that she needs a friend because of the situation she is in at home. Despite of the kindness Natalie's father gives to Tulip, she burns his palace hotel for no reason at all except for that Tulip is evil, sick and also twisted. Tulip also was using Natalie for her to do things for her and show off and be big headed that she has got one friend. She is showing off about Natalie because no one would ever have her in his or her gang. But Natalie is to blame for as well because she didn't do anything to stop the friendship earlier or even help Tulip become more kind and friendly. But Natalie started doing something when it was too late. But the only words to describe Tulip are SICK, TWISTED, STUBBORN AND SELFISH. And as it says in the book "No one is born evil. No one." So it was Tulips fault that she was like this and others were to blame too. The Tulip Touch Parveer Singh 7c M.S.D ...read more.