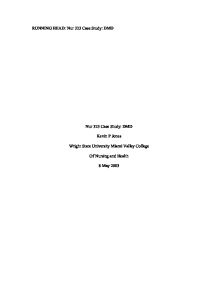 Of Nursing and Health.

The child will have difficulty going up steps (Emery 2002). "[This is characterized by having] to first put one foot, then the other foot, on the same step before moving on to the next one" (Porter et al., 2002). Soon he'll have to pull himself up using the handrail (Porter et al., 2002). The progressive weakness of the muscles results in Gower's maneuver (Emery 2002). Gower's maneuver is characterized by "climbing up his/her thighs, pushing down on them, to extend the hips and trunk" (Emery 2002). Most patients will have large calves. This enlargement is due to fatty infiltration (Wong 2001). "Over the next few months, he will walk more and more on his tiptoes, and develop...lordosis. He'll start to fall more often and be able to rise again only by pulling on objects or by placing his hands on the floor while standing and then lifting his upper body by "climbing" up on his legs with his hands. ...read more.

Eventually, his body curves until his ribs may be resting on his hip bones. The affected youngster may also develop tightening of the joints or "contractures" at the hips, knees, ankles, shoulders and elbows, to the point where the legs are bent up against the stomach with the feet pointing down and the arms locked into the sides with elbows bent. With additional weakness of the chest muscles, the youngster will be unable to breathe deeply or cough properly, and even minor colds and chest infections have a high chance of leading to pneumonia. Severe respiratory problems mark the disease's final stages, usually claiming the lives of those affected during their twenties. The heart muscle is affected at times, and some children may die of heart failure. Some degree of mental impairment is usual, about 20 percent of boys have an IQ of less than 70. Weakness is mainly proximal and progressive. Ultimately, a wheelchair becomes necessary, in most cases by age 12. Pneumonia compounded by cardiac involvement is the most frequent cause of death, which happens in the late teens or early 20's" (Emery 2002). ...read more.