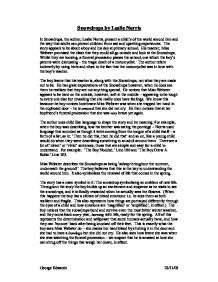 Snowdrops by Leslie Norris In Snowdrops, the author, Leslie Norris, present a child's of the world around him and the way that adults can protect children from sad and upsetting experiences. The story appears to be about a boy and his day at primary school. His teacher, Miss Webster promised the class that they could all go outside and look at the Snowdrops. Whilst they are looking, a funeral procession passes the school, one which the boy's parents were discussing - the tragic death of a motorcyclist. The author refers indirectly by using hints and clues to the fact that the motorcyclist was in love with the boy's teacher. The boy learns that his teacher is, along with the Snowdrops, not what they are made out to be. ...read more.

form of a list, as in: 'Then he did this, then he did that' and so on, like a young child would do when they were describing something to an adult around them. There are a lot of 'direct' or 'vivid' sentences, those that are simple and easy for a child to understand. For example: 'The Boy Nodded.' Line 186 and 'The Boy Drew A Robin' Line 103. Miss Webster describes the Snowdrops as being 'asleep throughout the summer, underneath the ground!' The boy believes that this is the key to understanding the world around him. It also symbolises the renewal of life that comes in the spring. The story has a main symbol in it: The snowdrop symbolising an emblem of new life. ...read more.

He also sees how brave she was when she was watching the funeral procession - we suspect that he is amazed at how she can shrug off the things that weigh her down, in effect. The end of the story is very significant as Miss Webster reveals her emotions by crying out loud in front of the children: 'Miss Webster continued to cry aloud in the midst of the frightened children' This proves, in effect, the boys theory of that his teacher is hard on the outside an soft in the middle as she finally shows her emotions to her dead boyfriend's funeral procession, and so proves to the world that children portray things differently and not everyone, including life, is what it's made out to be. George Edwards 23/11/03 ...read more.