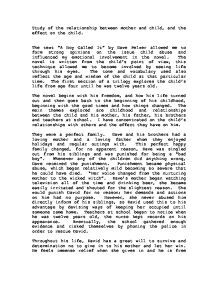 Study of the relationship between mother and child, and the effect on the child.

Study of the relationship between mother and child, and the effect on the child. The text "A Boy Called It" by Dave Pelzer allowed me to form strong opinions on the issue child abuse and influenced my emotional involvement in the novel. The novel is written from the child's point of view, this technique allowed me to become involved by seeing life through his eyes. The tone and vocabulary used also reflect the age and wisdom of the child at that particular time. The first section of a trilogy explores the child's life from age four until he was twelve years old. The novel begins with his freedom, and how his life turned out and then goes back to the beginning of his childhood, beginning with the good times and how things changed. The main themes explored are childhood and relationships between the child and his mother, his father, his brothers and teachers at school. I have concentrated on the child's relationships with others and the effect they have on him. They were a perfect family. Dave and his brothers had a loving mother and a loving father whom they enjoyed holidays and regular outings with. This perfect happy family changed, for no apparent reason, Dave was singled out from his siblings and was punished for being a "bad boy". ...read more.

David believes that he is a "bad boy" because he is forced to stand inform on the mirror and repeat it to his reflection. He cannot understand why he is treated this way, but accepts it. David wished that people would realise that he is not a bad boy, and it's not his fault that he has to steal their lunchboxes. "It's so important for them to know that I'm not a bad boy. I want so much to be liked, to be loved." The children at school are very cold towards him, and his brothers are instructed not to play with him. He has no real relationships or friendships with others. When he goes to visit the nurse, she hugs him, shows concern and gives him affection. This is a complete contrast to what anyone has shown him before, someone cares about him. "She is so warm, I don't want to let go. I want to stay in her arms forever," Another character whom David feels protection from is his father. As long as his father is at home, his punishments become much milder. He had an image created in his mind that his father was a hero; he was superman in his dreams. ...read more.

She told the school principle "David is a very bad boy and deserves to be punished" and told them the reason was that he seeks attention because of the new baby in the family. Reading this novel of an account of one child's struggle to survive childhood because of his mothers' beatings made me aware of how tragic childhood can be, it is not a happy experience for all children. This made me appreciate my life, because I have many happy memories of my childhood and was brought up by caring parents who are still happily married. The issues explored captivated thoughts in my mind on child abuse, I firmly believe that in no circumstance is violence towards a child necessary. I admire David's power not to give in to her cruel games, although he is physically beaten, mentally he remains strong. Dave Pelzer has told an incredible survival story of himself as a young boy. My emotional evolvement made me cry at the bad times and smile through the good times. The novel also enforces the fact that we would rather turn away than get involved to help. Life is not always great, but even Dave was able to do something about it in his situation. David believed that there was "a light at the end of a very dark tunnel" and life goes on. ...read more.