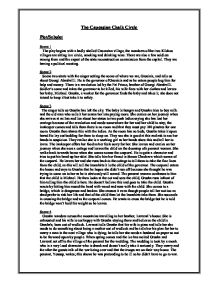 The play begins with a badly shelled Caucasian village, the members of the two Kilchos villages are sitting in a circle, smoking and drinking wine. There are also a few soldiers among them and the expert of the state reconstruction commission from the capital. They are having a political meeting.

Scene two starts with the singer setting the scene of where we are, Grusinia, and tells us about Georgi Abashvilli. He is the governor of Grusinia and as he enters people beg him for help and money. There is a revolution led by the Fat Prince, brother of Georgi Abashvilli. Soldier’s come and takes the governor to be killed, his wife flees with her clothes and leaves her baby, Michael. Grusha, a worker for the governor finds the baby and takes it, she does not intend to keep it but take it to safety.

The singer tells us Grusha has left the city. The baby is hungry and Grusha tries to buy milk and the old man who sells it her scams her into paying more. She carries on her journey when she arrives at an Inn and lies about her status to two posh ladies saying she has lost her carriage because of the revolution and needs somewhere for her and her child to stay; the innkeeper comes and tells them there is no room and that they must pay 180 piastres for one room. Grusha then shares this with the ladies. As the room has no beds, Grusha takes it upon herself to lay out bedding for them to sleep on. They see she is good at this and ask to see her hands in suspicion. They realise she is a working girl as her hands show this and tell her to leave. The innkeeper offers her food as her feels sorry for her. She leaves and carries on her journey when she sees a cottage and leaves the child on the doorstep of a peasant woman. She walks back towards home when she comes across the corporal. He is quite a character and tries to put his hand up her skirt. She tells him her fiancé is Simon Chachava which scares of the corporal. He leaves her and she runs back to the cottage to tell them to take the fine linen from the child, as this will tell the Ironshirts it is the child of the governor. The corporal enters the house and says to Grusha that he hopes she didn’t run off because she thought he was trying to come on to her as he is obviously still scared. The peasant woman confesses to him that the child is Michael. He then looks at the cot and sees the child, Grusha runs infront of him telling him the child is hers. He doesn’t believe this and goes to take the child. Grusha reacts by hitting him round the head with wood and runs with the child. She comes to a bridge, which is dangerous and broken. She crosses it even though people tell her not too as shed prefer to risk her life and that of the child than let the Ironshirts take them. She succeeds in crossing the bridge and as the corporal comes. He wants to cross the bridge but he is told the bridge won’t hold his weight so he leaves.

Grusha wanders across the mountains travelling to her brother, Lavrenti’s house. She is exhausted and his wife is not happy with Grusha staying there and believes the child is Grusha's, born out of wedlock. Lavrenti tells Grusha that his wife is piase and tells her she needs to do something about being a mother out of wedlock and he tells her his plan for her to marry a man in the next village who is dying; he tells her she needs a husband on paper so not to be frowned upon by people. When spring comes and the ice has melted Grusha and Lavrenti set off to the village of the peasant for the wedding. The wedding is took by a monk who is a very loud character who is drunk and doesn’t really take it seriously. They marry and the after the guests talk of the war being over and that the troops are on their way home. The peasant, Yussup, wakes; this shows he was pretending to be ill so he didn’t have to go to war. He kicks the guests out and then orders Grusha around. Yussup makes Grusha clean for him and says its Grusha’s job to pleasure him. This is something she does not want to do as she wants to stay faithful in bed to Simon Chachava, which she does. The scene goes ahead a few years and Simon Chachava comes to see Grusha, she explains that she is unfaithful by name but not in bed]. She tries to explain that Michael is hers but she didn’t sleep with anyone. He doesn’t understand and goes to leave. He sees the Ironshirts come and take Grusha and Michael away as they have tracked her down as the governors wife has come back.

The subplot is that of Azdak. It is back in time just as the revolution was starting. He is a very clever man but is in rags and is tipsy. He sees a fugitive in the woods and hides him in his hut. He asks to look at his hands and sees he has never worked. The fugitive tries to bribe Azdak into staying in his hut for one night with one hundred thousand piastres. Azdak refuses as the fugitive is going to send it after the revolution is over and Azdak doesn’t trust that. A policeman called Shauva comes to see Azdak for hunting rabbits, Azdak persuades him not to arrest him. Azdak gives shelter to he fugitive, only to find out that he was a murderer, The Grand Duke. Azdak was ashamed of himself and ordered Shauva to take him to Nukha to be judged. In the court three Ironshirts are sat drinking. From a pillar sits a man in a judge’s robe, hanged. He demands a trial for the Ironshirts to tell there is no judge for this trial. The Ironshirts realise that Azdak is a clever man; they consider him being judge as the fat prince enters and begs it to be his nephew and tries to get Azdak hanged. This Ironshirts disagree and declare him a judge. The rest of the scene is Azdaks trials, which he is in favour of the peasants.

It then turns into Grusha’s trial; Simon Chachava is there and overhears Grusha talking about him. Azdak enters with two Ironshirts, he is beaten and in rags. The rider then enters and orders the Ironshirts off him and then tells them that the grand duke has ordered them to keep Azdak as judge to thank him for letting him stay with him. The case begins and the governor’s wife bribes the judge, Grusha has nothing to give him. The firsts lawyer of the Governors wife tells Azdak of how the child is hers and tries to prove Grusha of not being the mother. The second Lawyer then argues that the governor’s wife is not aloud into the palace of her husband without the child. This then makes Azdak think. Simon Chachava then says he is the father of the child. Azdak does one final test which he puts the child in a Chalk Circle and asks the two ladies to pull the child out of the circle. The one who succeeds wins. Grusha lets go of the child. She is then ordered to do it again by Azdak and she refuses. Azdak then sees that she is only thinking of the safety of the child and lets her keep Michael.

In the final part of the play Azdak divorces Grusha and Yussup to leave Simon, Grusha and Michael as a family. Couples come into the scene to dance and celebrate. Adzaks stood disappearing into the crowd and then totally disappears. It ends with the singer telling us;

“ And after this evening Azdak disappeared and was never seen again”

The story of the play is a moral, linked to the ancient song told by the singer in the final lines of the play.

“That what there is shall belong to those who are good for it, thus

The children to the maternal, that they thrive;

The carriages to good drivers, that they are driven well;

And the valley to the waters, that shall bear fruit”