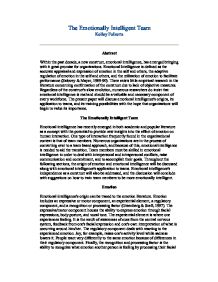 Possibly happy and sad moods could be associated with certain information processing styles that affect performance. Research has shown that people find it easier to categorize aspects of problems as related or unrelated when happy which has been linked to the facilitation of creative thinking (Isen & Daubman, 1984). Also, happy individuals experience higher levels of self-efficacy which is a critical aspect of performance (Salovey & Birnbaum, 1989). In addition to creative thinking, constructive thinking is dependent on managing emotion. Constructive thinking refers to a "person's ability to think in a manner that solves everyday problems in living at a minimal cost in stress" (Katz & Epstein, 1991, p.789). How people manage their emotions can be a major determinant of how effectively intellectual abilities can be assembled. Because teams utilize both creative and constructive thinking in their problem solving, and because teams desire high self-efficacy to maintain performance, emotional intelligence is a valuable resource. Attention is directed to different problems when powerful emotions are experienced. People may be redirected to give attention to problems with immediate importance. Rather than interrupt ongoing cognitive activities, emotion can assist people in reprioritizing the internal and external demands on their attention, and allocating resources accordingly (Salovey & Mayer, 1989-90). Moods may be used to motivate persistence at challenging tasks. People may use good moods to boost their self-efficacy, thus increasing performance at difficult tasks (Salovey & Birnbaum, 1989). People with positive attitudes create interpersonal experiences that lead to positive outcomes for themselves and others around them (Epstein & Feist, 1988). Teams can use emotional intelligence to remain focuses on the task at hand while keeping a positive rapport with team members. Emotional Intelligence and Teams Management theorists have defined a "team" as a distinctive class of group, which is more task oriented than other groups, and which has a set of obvious rules and rewards for its members" (Adair, 1986). ...read more.

A measure such as the one located in the appendix can be used the team's current level of emotional intelligence. In teaching members emotional skills, it is important to use such techniques as role-plays, modeling, and encouragement. Martinez-Pons (1998-1999) found that in teaching emotion skills to children, modeling, encouragement, facilitation, and rewarding behavior by others were key determinants of emotional intelligent behaviors being learned and later practiced. It is also critical that team members' emotional styles are acknowledged by the entire team and that the team members also define team values which will then define expected emotional responses. It is also imperative to point out to the training group that individuals from different subcultures approach emotions differently. Certain cultures produce more stoic individuals while others promote extreme openness. This type of diversity must be acknowledged and appreciated in order for the team to be successful. It is important to keep in mind that emotional intelligence training cannot be accomplished in a one day or one week training session. Training in emotion skills takes many months and must be revisited periodically to ensure the learning has been retained and put into practice on the job. Just because emotional skills are taught, one cannot guarantee the development of an emotionally intelligent person or team. Conclusion In conclusion, emotional intelligence is a valuable construct for any organization contemplating or currently practicing the teams approach. Because teams are constructed of individuals who experience and exhibit emotions, emotional intelligence is needed so team members can interact in an appropriate and efficient manner. If team members are trained in emotional intelligence, perhaps they will enhance their communication with one another, increase chances of accomplishing their goals smoothly, increase cohesion and commitment, and decrease interpersonal and intrapersonal conflict. Although scientists have not reached an agreement on the categorization of the construct, it seems to be a valuable concept within the organizational arena. With proper training objectives and measurement, organizations cannot lose in the implementation of the training. Hopefully, in the future emotional intelligence will be respected and revered as a highly critical aspect of team success. ...read more.