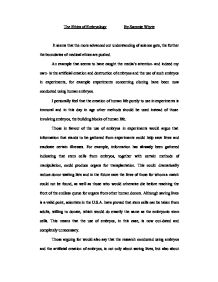 The Ethics of Embryology.

The Ethics of Embryology By Sammie Whyte It seems that the more advanced our understanding of science gets, the further the boundaries of medical ethics are pushed. An example that seems to have caught the media's attention- and indeed my own- is the artificial creation and destruction of embryos and the use of such embryos in experiments, for example experiments concerning cloning have been now conducted using human embryos. I personally feel that the creation of human life purely to use in experiments is immoral and in this day in age other methods should be used instead of those involving embryos, the building blocks of human life. Those in favour of the use of embryos in experiments would argue that information that stands to be gathered from experiments could help save lives and eradicate certain illnesses. For example, information has already been gathered indicating that stem cells from embryos, together with certain methods of manipulation, could produce organs for transplantation. This could dramatically reduce donor waiting lists and in the future save the lives of those for whom a match could not be found, as well as those who would otherwise die before reaching the front of the endless queue for organs from other human donors. ...read more.

The Hashim's, a British family, have been given the go-ahead to have embryos artificially created and then screened, firstly for any disorders and then again to find a compatible embryo to donate bone-marrow for the Hashim's son, Zain. Nevertheless, I strongly disagree with creating a child to save another - as I believe that a child should be brought into the world for no one else's benefit other than its own. This clearly isn't the case when the child is being created to play donor to another. An argument used by those in favour, is that the point cells become a human life is the instant the baby is born. Hence making experimenting on embryos, in their eyes, an acceptable practice. But those opposing embryonic research, for instance anti-abortionists, would disagree and say; that the point cells become a human life is the moment of conception, making embryonic research wrong. Pre-natal experimentation is not a new practice. During the Second World War, it was later discovered; the Nazis had been using embryos (and the later foetal stage) to experiment on. This, when discovered, was abhorrent, so much so that some people refuse to use information gathered from these experiments, even though it could help save lives. ...read more.

The only difference between a baby and an embryo is that the baby has been given enough time to develop, so it can survive outwith the womb. Why then should we have any right to subject embryos to experiments, and not see it as wrong? Certain experiments (for instance cloning) require the results to be monitored over an extended period of time to assess any repercussions. In this case it is likely that the embryos would have to be grown past the embryonic stage and even up until the point of birth. This, it must be agreed, is wrong. Even though embryos on which experiments have been conducted (if given the chance) grow-up and are themselves perfectly healthy, who is to say that the experiment will not have repercussions- such as infertility- generations into the future? The more and more advanced our understanding of science gets, it seems that our acceptance of certain practices is pushed further and further away from what I- and millions of others- believe is ethically and morally right. Embryo research is to me disgusting. However, now or in the future it is unlikely that embryonic research will be stopped, as it is allowing businesses to cheaply exploit our appetite for advance, even at the expense of others. ...read more.