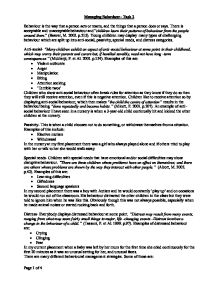 Types of children's behaviour and strategies to deal with these

Managing Behaviour- Task 2 Behaviour is the way that a person acts or reacts, and the things that a person does or says. There is acceptable and unacceptable behaviour and "children learn their patterns of behaviour from the people around them." (Beaver, M. 2002. p.213). Young chilldren may display many types of challenging behaviour which are split up into anti-social, passivity, special needs, and distress categories. Anti-social- "Many children exhibit an aspect of anti-social behaviour at some point in their childhood, which may worry their parents and carers but, if handled sensibly, need not have long-term consequences." (Mukherji, P. et Al. 2001. p.154). Examples of this are: * Violent outbursts * Anger * Manipulation * Biting * Attention seeking * 'Terrible twos' Children who show anti-social behaviour often break rules for attention as they know if they do so then they will still receive attention, even if this is negative attention. Children like to receive attention so by displaying anti-social behaviour, which then makes "the child the centre of attention" results in the behaviour being "done repeatedly and become habits." (Minett, P. 2001. p.207). An example of anti-social behaviour I have seen in a nursery is when a 3-year-old child continually hit and kicked the other children at the nursery. ...read more.

(Tassoni. P. et Al. 2002. p.284). Fear Comfort/ reassurance- If a child is behaving badly as s/he is afraid of something then it is necessary to comfort the child and explain to them what is happening. The child needs reassurance that it will be ok. I will explore a range of possible strategies to manage the child's behaviour in the example below. Example: During my first placement in a nursery there was a boy aged 3 who was constantly tired as he was taken to a nursery at 7:30am and was there until 5pm or 6pm. His home life was believed to be disruptive and he had a lack of routine as he would go to sleep at differing times, and then sleep on and off throughout the day. This lack of routine is an example of environmental factors affecting his behaviour. As a result of his tiredness he was quite aggressive and 'snappy' when talking to people and would snatch toys from the other children. His lack of social skills seemed to be a result of little interaction with his parents and family and he seemed to think that he had to shout to be heard and get what he wants. ...read more.

Action plans need to include all the relevant information needed to help the child and this can include dates of when each step aims to be resolved. It is necessary that action plans use small, succinct steps to get to the desired result, for example, acceptable behaviour from the child. Small steps will be more manageable and attainable to achieve. Action plans can also include activities, which could help the child, and plan times that are set aside for one-on-one communication with the child. Both the early years setting, and the parents should have a copy of the action plan and it should be kept updated regularly. One system that could be put into place with this child is a reward/consequence chart. As his behaviour is not socially acceptable then he needs to learn what is acceptable and unacceptable and a good way of doing this for a child of this age is through a reward system. When he acts in an acceptable way he will be praised and rewarded with a sticker or 'smiley face', and when he displays unacceptable behaviour then a sticker or 'smiley face' is taken away. He will soon start to realise that his unacceptable behaviour result in a bad response. This is a way of conditioning his behaviour. ...read more.