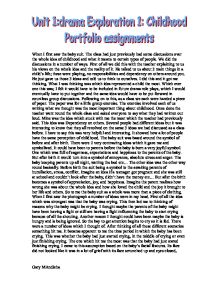 When I first saw the baby suit. The class had just previously had some discussions over the whole idea of childhood and what it means to certain types of people. We did the discussions in a number of ways. First of all we did this with the teacher explaining to us his views on the whole idea and the reality of it. He talked to us about 3 main things in a child's life; these were playing, no responsibilities and dependency on others around you. He just gave us those 3 ideas and told us to think to ourselves. I did this and it got me thinking. What I was thinking was which idea represented a child the most. Which ever one this was; I felt it would have to be included in future drama role plays, which I would eventually have to put together and the same idea would have to be put forward in countless group discussions. Following on to this, as a class we each were handed a piece of paper. The paper was for a little group exercise. The exercise involved each of us writing what we thought was the most important thing about childhood. Once done the teacher went round the whole class and asked everyone to say what they had written out loud. Mine was the idea which stuck with me the most which the teacher had previously said. This idea was Dependency on others. Several people had different ideas but it was interesting to know that they all revolved on the same 3 ideas we had discussed as a class before. I have to say this was very helpful and interesting. It showed how a lot of people have the same perception of childhood. The baby suit was based around the symbol of before and after birth. There were 2 very contrasting ideas which it gave me and symbolized. ...read more.

So we left this piece there. From the black and white photograph of the crying baby we started developing the idea of past experiences as children into a more developed idea. We were all put in groups and given the picture once again. This time we had to devise a piece based on memory of past events such as these. In the end we were supposed to have a role-play made up of 2 scenes which were before and after. Our character was supposed to have been effected by an event in his past which changed him in his later life. We started developing our piece by first brainstorming various ideas of what we could do. I decided it would be a good idea if everyone in the group said something which changed them if slightly or maybe a lot in their lives. 3 of us including me said how when no one pays attention to you in life at a young age especially it can really change your personality and when you grow older you can really crave attention. So we chose this idea. To make it more interesting we decided instead of doing a flash forward we were going to do a flash back. From here we decided to make 2 pictures in the before and after scenes, 1 in each. The picture in the first scene: This was when the character was in his older life and he reacts to what affected him as a child. The picture was of him standing away from a group of his co-workers whilst they were all in a huddle discussing business. I thought this was good because it showed how he wasn't involved in anything due to no one paying attention to him. The second picture was the scene of the event which affected him: This was a picture of him pulling at his parents trousers near their ankles because the boy wanted to be heard but the parents are taking no notice of him. ...read more.

Is that not allowed anymore? (Pause.) It feels like I'm always by myself, I'm by myself I feel like I'm going out of my mind, I do. I sit there, I'm thinking, I'm not gonna make it through the next ten seconds. I just can't stand it. But I do, somehow, I get through the ten seconds, but then I have to do it all over again, cause they just keep coming. Just once I would like to maybe get a girl friend but I can't. If my parents didn't want to pay attention to me why would another girl to any different. For the work we did in this unit my role in the group was mostly to come up with ideas, brain storm, work with the group in any helpful ways and a lot of the time to be a leader and point the way forward. My choices of character to play were decided by me and the group based on the information we had to work with, which was the picture. My difficulties were with the photo of the baby, I have problems figuring out whether the baby's emotions were sad, getting better, getting worse etc... I overcame them by trying out different alternatives and eventually I found an alternative which worked well. If I had more time I would do more group discussions and finish unfinished work. The effect we achieved was the imprint of the importance of the mistreatment, good treatment and overall impact of the baby on the bay's life and the parent's life. I learned a lot about childhood. I learnt how a child's past can affect his present dramatically, I learnt about how a child entertains themselves. I also learnt abut the affect of a child abused at home can have on his school performance also on how and why children argue with their parents. During this Unit we were also required to watch and write a play review from a play which we watched live. The play review will be part of my coursework. Gary MAndizha ...read more.