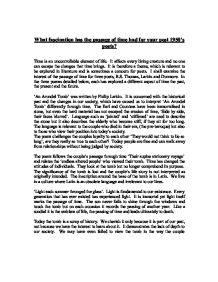 What fascination has the passage of time had for your post 1950's poets?

What fascination has the passage of time had for your post 1950's poets? Time is an uncontrollable element of life. It affects every living creature and no one can escape the changes that time brings. It is therefore a theme, which is relevant to be explored in literature and is sometimes a concern for poets. I shall examine the interest of the passage of time for three poets, R.S. Thomas, Larkin and Dunmore. In the three poems detailed below, each has explored a different aspect of time the past, the present and the future. 'An Arundel Tomb' was written by Philip Larkin. It is concerned with the historical past and the changes in our society, which have caused us to interpret 'An Arundel Tomb' differently through time. The Earl and Countess have been immortalised in stone, but even the hard material has not escaped the erosion of time, 'Side by side, their faces blurred'. Language such as 'jointed' and 'stiffened' are used to describe the stone but it also describes the elderly who become stiff, if they sit for too long. The language is relevant to the couple who died in their era, (the pre-baroque) ...read more.

Why, then, are my hands red / With the blood of so many dead? / Is this where I was misled? The narrator is struggling to grasp how the human race can inflict pain on its own kind. This is something, which has occurred throughout time and has become part of human nature. He must come to terms with the acts he has committed because he has nowhere to go and no one to turn to. Time will not allow him to alter his actions nor can he escape to the future to a place beyond his own life. He is trapped 'here' which demonstrates the difference between the expanse of the universe and the confines of our own lives. The narrator tells his reader through the value of time in his poem, that life is a gift, which should be held on to at all cost. It must not be wasted and every opportunity in life should be grasped with both hands. The poem has religious references, 'Does no God hear when I pray' he is asking why he has been forsaken. This probably demonstrates that it is human nature to question afterwards and that the value of time is to learn from our mistakes in the past. ...read more.

The constant movement of generations also shows what a fragile existence we have on earth. We are tenants on this planet and just form another link between past tenants and future tenants. Life is so brief that within a hundred years time has changed the people and the surroundings beyond recognition. All mothers can do is to try and create a world for their children where they can be confident of their child's success, quality of life and well being. The role of parent recedes later in life as the child takes the mothers role and death is the final severance of the child's security. Time has replaced the mother with the child and as the poem portrays the birth of a new generation, so the cycle continues. In conclusion time is central to these three poems. The first dealt with the historical past, the second, with the confines of the present and the third dealt with the perils of the future and the unknown. As part of the passage of time, death is a recurring topic in the poems and the regeneration that follows. Throughout time cultures have evolved and the future brings new threats and fears. These three poems have explored time and demonstrated its value to humanity. ...read more.