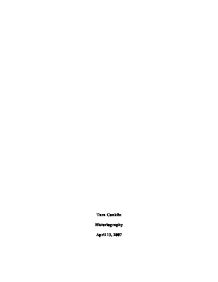 Tara Conklin Historiography April 13, 2007 In the 1960's feminist history began to rise. Barbara Welter pioneered the study of nineteenth century women, their roles in society, and the moral compass that drove them. Since the publication of her article The Cult of True Womanhood, many have agreed with her sentiments. In the past twenty-five years the application of Welter's claims have been hotly debated. Barbara Welter pioneered the study of the "Cult of Domesticity." Welter claimed that women of the nineteenth century were "held hostage in the home."1 In an environment where things constantly were changing, such as control of fortunes, materialistic gains and the chance for social mobility, according to Welter one thing remained the same, a "true woman." Welter described the "true woman," as holding steadfast to four qualities, piety, purity, submissiveness and domesticity.2 Anyone testing the intrinsic worth of the four qualities was seen as an enemy to civilization, and of God.3 Women saw it as "a fearful obligation, a solemn responsibility, which the nineteenth century woman had to "uphold the pillars of the temple with her frail white hand."4 By using the four virtues to build her own sense of woman, and judge her peers the average woman was promised contentment and power. Without them, no matter what else she had accomplished, she was nothing. ...read more.

them.24 Welter concluded with "making beds was good exercise, the repetitiveness of routine tasks inculcated patience and perseverance, proper management of the home was a surprisingly complex art, after reading The Young Ladies Friend.25 Barbara Welter closes her essay reflecting that "the very perfection of True Womanhood, carried within itself the seeds of its own destruction."26 Welter suggested that real women frequently felt as if they did not live up to the ideal of True Womanhood, blaming themselves, challenging the norms and encouraging the range of qualities that qualified one as a "true woman."27 Welter also accused the magazines and other publications of manipulation of their readers in order to convince them that the stability of society rested upon their adherence to the four virtues.28 Since the article written by Barbara Welter, women's history has exploded. The "new" history has come to include women of all classes, races and religion. The application of the "cult of domesticity," can no longer be applied to nineteenth century American women as a whole. Under further review of true womanhood, scholars such as Linda Kerber, Kathleen Brown , Mary Kelly and Laura McCall reject the use of a unilateral acceptance applying the virtues of true womanhood to all women. Kathleen Brown believes that by embracing a more expansive conception of early American history-including the effects European, colonial Africa and indigenous populations we can create a more ...read more.

righteousness wielded against the male sexual license and the double standard."50 She backs up this argument quoting from Nancy Cott's Passionlessness: An Interpretation of Victorian Sexual Ideology, 1790-1850, "antebellum women translated the same feminine purity into a female passionlessness that they deployed to secure social and familial power."51 With reading antebellum fiction Kelley became skeptical of the submissiveness that Welter described that deprived women of power. Reading Private Women, Public Stage: Literary Domesticity in Nineteenth Century America, replaced and discarded much of Welter's theory. This coincides with McCall's findings in her study. In regards to domesticity Kelley touches on a change in boundaries that Welter used to define it, but relates it mostly to a change in women's involvement in the anti-slavery movement. Barbara Welter made claims that spread the ideology of "true womanhood," across the entire United States, spanning all races and classes. Newer historians suggest that while this culture may have applied to certain groups, upon further review and scrutiny realized it did not apply to all. Welter closed her article suggesting that the cult of domesticity made women challenge the norm and brought about change, a point often overlooked by historians, arguing against Welter. The focus of Welter's article lies in proving how the four virtues taught women how to be women, not how it shaped them into changing how they thought of themselves and how other's viewed them. ...read more.