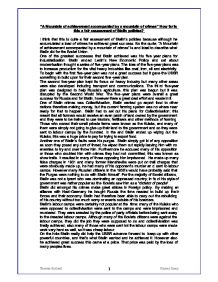 A Mountain of achievement accompanied by a mountain of crimes&quot; How far is this a fair assessment of Stalin policies?

"A Mountain of achievement accompanied by a mountain of crimes" How far is this a fair assessment of Stalin policies? I think that this is quite a fair assessment of Stalin's policies because although he accumulated a load of crimes he achieved great success. So the quote, "A Mountain of achievement accompanied by a mountain of crimes" is and ideal to describe what Stalin did for the Soviet Union. One of the greatest successes that Stalin achieved was his five year plans for industrialisation. Stalin ended Lenin's New Economic Policy and set about modernisation thought a series of five-year plans. The idea of the five-year plans was to increase production for the vital heavy industries like coal, iron, oil and electricity. To begin with the first five-year plan was not a great success but it gave the USSR something to build upon for their second five-year plan. ...read more.

Those who owned their small private farms were known as the Kulaks, and many of them were simply not going to give up their land to the government and so they were sent to labour camps by the hundred. In the end Stalin ended up wiping out the Kulaks, this was a huge price to pay for trying to export food. Another one of Stalin's faults were his purges. Stalin simply got id of any opposition as soon they posed any sort of threat, he wiped them out rapidly leaving him with no enemies to try and over throw him. Furthermore he accused many of his opposition or those who doubted him with crimes they had not committed; this was known as show trails. ...read more.

Stalin's labour camps were certainly not popular at the time; many of the Kulaks who were opposed to collectivisation were sent to the camps and were imprisoned and murdered. They were arrested by the police of party officials before being sent away to the dreaded labour camps. Although many of the Soviets citizens were against the labour camps, they did the job they were supposed to do and collectivisation was finally achieved, also many of those who were sent tot the labour camps were made work very hard as well, so it was cheap labour. On the hole Stalin really did help the USSR advance forward to keep up with other powerful countries, and that's what Stalin wanted and he achieved it. However also he achieved great success this came at a price. That price was paid by the loss of many peoples lives. 1 Thomas Rutland History Essay ...read more.