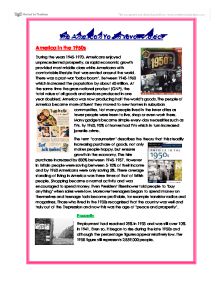 The American Youth Revolt Project America in the 1950s During the years 1945-1970, Americans enjoyed unprecedented prosperity, as rapid economic growth provided most middle class white Americans with comfortable lifestyle that was envied around the world. There was a post-war 'baby boom'. Between 1945-1960 which increased the population by about 40 million. At the same time the gross national product (GNP), the total value of all goods and services produced in one year doubled. America was now producing half the world's goods. The people of America became more affluent they moved to new homes in suburban communities. Not many people lived in the inner cities as fewer people were keen to live, shop or even work there. Many gadgets became simple every-day necessities such as TVs. By 1960, 90% of homes had TVs which in turn increased juvenile crime. The term 'consumerism' describes the theory that this steadily increasing purchase of goods, not only makes people happy, but ensures growth in the economy. The hire purchase increased by 800% between 1945-1957. However in Britain people were saving between 5-10% of their income and by 1960 Americans were only saving 5%. There average standing of living in America was three times of that of British people. Shopping became a normal activity and was encouraged to spend money. ...read more.

For many older Americans it was difficult to understand or tolerate this 'generation gap'. The Hippy movement of the 1960s Some young people took up an entirely different kind of protest. They 'dropped out' and became hippies. They turned against the lifestyles of their parents and some turned to radical politics. Their behaviour challenged the established values of older people. They decided not to work or to study therefore parents found it very difficult to understand or tolerate the behaviour of their children. They travelled around the country in buses and vans which they decorated with flowers or psychedelic designs. Hippie clothes, with long hair and mystical religions, became fashionable, along with the use of drugs and permissive sexual behaviour. They talked about peace and love and used the slogan, 'make love not war'. Many of them were middle class white college students and attended open-air concerts to listen to musicians such as Bob Dylan. For many Americans this was deeply disturbing form of protest than student radicalism. The parents of hippies had brought their children up to believe in the virtues of working hard in school and then working hard at a career to earn money to get a big house, car etc. Their behaviour, in particular their use of drugs, frequently brought them into confrontation with the police. ...read more.

At Kent State University, Ohio, hundreds of students threw stones and jeered at National Guardsmen (soldiers) sent in to keep order. Without warning the troops fired a volley of shots that left four defenceless students dead and a further nine wounded. People could not believe that such violence had occurred at a University. Students at four hundred and fifty colleges and universities immediately went on strike. The father of one of the dead students, 19 year old Alison Krause, made the emotional comment, 'My child was not a bum.' However the violence carried on and a few days later two students at another university who were protesting against the killings at Kent State were shot dead by the police. This was the turning point in the war and in the words of one historian, 'the blood spilled at Kent gave the war in Vietnam the dark stain civil war and, in time, made it insupportable.' The father of Alison Krause said 'his daughter resented being called a bum because she disagreed with someone else's opinion. She felt that crossing into Cambodia was wrong. Was this a reason for killing her? Have we come to such a sate in this country that a young girl has to be shot because she disagrees deeply with the action of the government?' Richard Nixon felt utterly dejected when he read what the father wrote, 'my child was no a bum.' By Melissa Lea 10k ?? ?? ?? ?? ...read more.