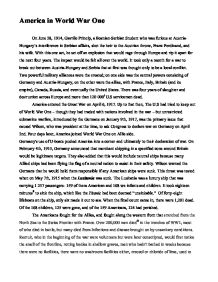 America in World War One On June 28, 1914, Gavrilo Princip, a Bosnian-Serbian Student who was furious at Austria-Hungary's interference in Serbian affairs, shot the heir to the Austrian throne, Franz Ferdinand, and his wife. With this one act, he set off an explosion that would rage through Europe and rip it apart for the next four years. The impact would be felt all over the world. It took only a month for a war to break out between Austria-Hungary and Serbia that at first was thought only to be a local conflict. Two powerful military alliances were the created; on one side was the central powers consisting of Germany and Austria-Hungary, on the other were the allies, with France, Italy, Britain (and its empire), Canada, Russia, and eventually the United States. There was four years of slaughter and destruction across Europe and more than 120 000i U.S servicemen dead. America entered the Great War on April 6, 1917. ...read more.

Over 200,000 men diediii in the trenches of WW1, most of who died in battle, but many died from Infections and disease brought on by unsanitary conditions. Recruit, who in the beginning of the war were volunteers but were later conscripted, would first notice the smell of the frontline, rotting bodies in shallow graves, men who hadn't bathed in weeks because there were no facilities, there were no washroom facilities either, creosol or chloride of lime, used to stave off the constant threat of disease and infection. Along with the smell of cordite, the lingering odour of poison gas, rotting sandbags, stagnant mud, cigarette smoke, and cooking food. Although overwhelming to a new recruit, they would soon get used to the smell and it eventually would become a part of them. Rats were a constant companion in the trenches. There were millions and they were everywhere, surviving by eating the human remains, they could grow to the size of a cat. ...read more.

During WW1, U.S Infantry Troops were nicknamed Doughboys. Although the origin of this term is not known, legend says it is linked to soldiers in the civil war who had big round brass buttons on their uniforms that we reminiscent of "doughboys", which were a dumpling of fried dough, much like a doughnut today. The term doughboy was not derogatory; it is present in diaries and letter of U.S servicemen as well as in newspapers of the time. Each doughboy carries 200 rounds of ammunition, two cans of canned beef, six boxes of hardtack (army biscuits), and a one quart canteen. At the end of the war the doughboys gave crossed no mans land and gave the Germans cigarettes, food rations, and soap in exchange for belt buckles, bayonets, and even a few iron crosses (German army metal). i Peter I. Bosco, World War I,(New York: Facts on file) pg x iiPeter I. Bosco, World War I,(New York: Facts on file)pg 5 iii JimmyTheJock, "World War One Trench Warfare" Hubpages[online] 2007[cited February 20, 2008] available from http://hubpages. ...read more.