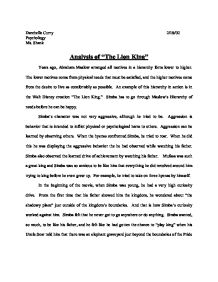 Darchelle Curry 2/18/02 Psychology Ms. Shank Analysis of "The Lion King" Years ago, Abraham Maslow arranged all motives in a hierarchy form lower to higher. The lower motives come from physical needs that must be satisfied, and the higher motives come from the desire to live as comfortably as possible. An example of this hierarchy in action is in the Walt Disney creation "The Lion King." Simba has to go through Maslow's Hierarchy of needs before he can be happy. Simba's character was not very aggressive, although he tried to be. Aggression is behavior that is intended to inflict physical or psychological harm to others. Aggression can be learned by observing others. When the hyenas confronted Simba, he tried to roar. ...read more.

Uncle Scar told him that there was an elephant graveyard just beyond the boundaries of the Pride Lands, Simba just had to go check it out. Consequently, he put not only himself in danger, but also Nala and Zazu. After his Uncle Scar exiled him from the Pride Lands, Simba was very sad and he felt that he was responsible for his father's death. The only motivation Simba had to survive was Timon and Pumbaa. If Simba had not have met them, then he would have died out in the world by himself. He had just begun to live, he could not even hunt for himself. Timon and Pumbaa helped Simba get past his troubles by teaching him their "problem free philosophy" and by telling him to "put his past behind him." ...read more.

They also helped him meet his esteem needs by not putting him down and always being there for him. Nala, Rafiki, and Mufasa all played a role in Simba's reaching the final step in the hierarchy, which is self-actualization. It began when Nala found Simba and reminded him that he is the king. While Simba was living with Timon and Pumbaa, he may have thought that he had reached self-actualization, but really he had forgotten who he was. Nala brings Simba back to reality, Rafiki literally knocks some sense into him, and reminds him that his father still lives in him, and Mufasa told him to remember who he is. Because Simba had met all five of the needs in Maslow's Hierarchy, he was able to return to Pride Rock, take his place as king, and finally he could really be like his father. ...read more.