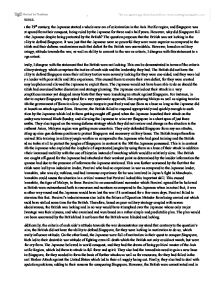 Analyzing the fall of Singapore

"The British did not lose the war. The Japanese won it". How far do you agree with the statement? Explain your answer. In the 19th century, the Japanese started a whole new era of colonization in the Asia Pacific region, and Singapore was not spared from their conquest, being ruled by the Japanese for three and a half years. However, why did Singapore fall to the Japanese despite being protected by the British? The question proposes that the British was not lacking in the ability to defend Singapore. It was just that the Japanese were so powerful they were more superior as compared to the British and their defense mechanisms such that defeat for the British was unavoidable. However, based on military strategy, attitude towards the war, as well as ability to commit to the war as criteria, I disagree with this statement to a large extent. Firstly, I disagree with the statement that the British were not lacking. This can be demonstrated in terms of the criteria military strategy, which comprises the tactics of each side and the leadership they had. The British did not have the ability to defend Singapore since their military tactics were severely lacking for they were one-sided, and they were led by a leader with poor skills and little experience. This caused them to create their own defeat, for they were created many loopholes and allowed the Japanese to exploit them. ...read more.

On the other hand, the Japanese were full of motivation in their quest to conquer Singapore, which led to their desirable war attitude of fighting even till death which the British not only could not match, but were a far cry from. The Japanese believed in world conquest, and they had the dream of being political master of the Asia Pacific Region, which led them to attack in full force and spirit. They also had the immediate need to gain a new base like Singapore, for they needed to form the basis of further attacks as well as for resources, for they had failed in the Pearl Harbor Attack against the United States which led to their oil supply being cut. Finally, they also had to deal with population problems, adding to their reasons for conquering Singapore. However, the British were unmotivated and in fact had little reason to protect Singapore since they viewed Singapore as a mere profitable trading port and it was not their homeland to begin with. They treated being a soldier as a job rather than a duty or prestige, for Queen Elizabeth was a ruler not a figurehead as compared to the Japanese's Emperor. Believing very strongly that they were supreme compared to all other races including the Japanese, they did not take the Japanese as a viable enemy. ...read more.