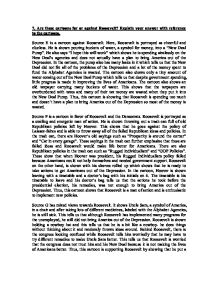 Are these cartoons for or against Roosevelt? Explain your answer with reference to the cartoons.

7. Are these cartoons for or against Roosevelt? Explain your answer with reference to the cartoons. Source E is a cartoon against Roosevelt. Here, Roosevelt is portrayed as cheerful and clueless. He is shown pouring buckets of water, a symbol for money, into a "New Deal Pump". He also says "I hope this will work" which shows he is spending aimlessly on the New Deal's agencies and does not actually have a plan to bring America out of the Depression. In the cartoon, the pump also has many leaks in it which tells us that the New Deal did not fix all of the problems of the Depression and a lot of the money spent to fund the Alphabet Agencies is wasted. ...read more.

He is shown throwing out a trash can full of old Republican policies left by Hoover. This shows that he goes against the policy of Laissez-faires and is able to throw away all of the failed Republican ideas and policies. In the trash can, there are Hoover's old sayings such as "Prosperity is around the corner" and "Car in every garage". These sayings in the trash can further emphasize that these are failed ideas and Roosevelt would make life better for Americans. There are also Republican policies in the trash can such as "Rugged individualism" and "GOP Policies". These show that when Hoover was president, his Rugged Individualism policy failed because Americans could not help themselves and needed government support. ...read more.

Roosevelt is shown holding a cowboy hat and this tells us that he is a bit like a cowboy- he does things without thinking about it and randomly throws ideas around. Behind Roosevelt, there is the congress looking confused while Roosevelt tells him worriedly that he may have to try different remedies to make Uncle Sam better. This tells us that Roosevelt is worried that the congress does not trust him and his New Deal because it is not making the lives of Americans better. Thus, this cartoon is supporting Roosevelt by showing that he put a lot of effort to bring America out of the Depression but it is also against Roosevelt by showing that his efforts did not improve the lives of Americans. (Word Count: 632 words) ...read more.