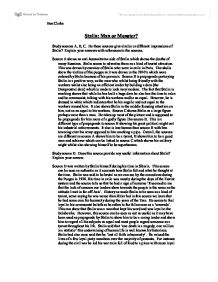 Assignment B: Stalin: Man or Monster

Stalin: Man or Monster? Study sources A, B, C. Do these sources give similar or different impressions of Stalin? Explain your answers with references to the sources. Source A shows an anti-humanitarian side of Stalin which shows the deaths of many Russians. Stalin seems to advertise them as a kind of tourist attraction. This was drawn by enemies of Stalin who were in exile in Paris. The skulls show the victims of the purges as it was drawn in the 1930's which were ordered by Stalin because of his paranoia. Source B is propaganda portraying Stalin in a positive way, as the man who whilst being friendly with the workers whilst also being an efficient leader by building a dam (the Dnieprostroi dam) which is made to look very modern. The fact that Stalin is smoking shows that while he has built a huge dam he also has the time to relax and be communist, talking with his workers and be an equal. However, he is dressed in white which indicates that he his angelic and not equal to the workers around him. It also shows Stalin in the middle focusing attention on him, not as an equal to his workers. Source C shows Stalin as a large figure perhaps more than a man. ...read more.

However, source F shares a view that is very much against Stalin. It was written in 1936 by Bukharin, at that time an enemy of Stalin after the losses of key Bolsheviks who were killed in the 'Purges'. Bukharin himself was a victim and was tried and executed in 1938. The author of source E is unknown but seeing how extreme it is, ' the first word it shall utter will be: Stalin' and how we now know of the terrible murders of the 1930's this is quite unbelievable and may have been written by the Bolsheviks as propaganda since it appeared in the party newspaper, Pravda. Bukharin had been betrayed by Stalin after he helped Stalin to become the leader over Trotsky. Not only Bukharin but Zinoviev and Kamanev, former allies of Stalin were said to be traitors to communism during the Purges and were executed. Source F can therefore be seen as reliable with Bukharin stating that Stalin was 'not a man, but a devil'. Stalin was regarded as a very suspicious man which is also stated in source F. Even though we now see that Stalin was a tyrant, people in Russia may still have seen him as a very successful and powerful man. We can see this from his propaganda. ...read more.

Stalin did erase all the Kulaks by 1934. Collectivisation did not achieve a lot only human lives. Stalin did not seem to care However, on the other hand Stalin did successfully make Russia a leading industrial power. His five year plans could be argued to have saved the Soviet Union from the Nazis. Stalin successfully used Russia's rich raw materials to his advantage. Unemployment was almost non-existent. Women were allowed to work (40% of workers) and bonuses were given for overachieving. Even with his great successes, the human cost was huge. Discipline in factories was harsh with punishments including death. Workers were not allowed to travel between cities and there were many deaths. 100000 people died in the Belamor canal, the same may have died during the making of the dam in source B. You can see from source C the might of Stalin's industrial Russia but you don't see the human cost that was made to make it. Stalin in his time was seen by many as a good leader this may have been upheld by fear of his labour camps and his secret police; he did get the job done. He is however, without doubt, a tyrant who killed many men to achieve his goals and stay in power. Source I shares my view that even if he was a successful leader, he did have 'a dark and evil side to his nature'. ?? ?? ?? ?? Ben Clarke ...read more.