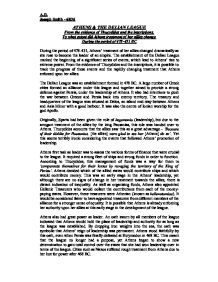 ATHENS & THE DELIAN LEAGUE From the evidence of Thucydides and the inscriptions, To what extent did Athens treatment of her allies change During the period of 478-431 BC During the period of 478-431, Athens' treatment of her allies changed dramatically as she rose to become the leader of an empire. The establishment of the Delian League marked the beginning of a significant series of events, which lead to Athens' rise to extreme power. From the evidence of Thucydides and the inscriptions, it is possible to track the progress of these events and the rapidly changing treatment that Athens enforced upon her allies. The Delian League was an establishment formed in 478 BC. A large number of Greek cities formed an alliance under this league and together aimed to provide a strong defence against Persia, under the leadership of Athens. It also had intentions to push the war between Greece and Persia back into enemy territory. The treasury and headquarters of the league was situated at Delos, an island mid-way between Athens and Asia Minor with a good harbour. It was also the centre of Ionian worship for the god Apollo. Originally, Sparta had been given the role of hegemonia (leadership), but due to the arrogant treatment of the allies by the king Pausanias, this role was handed over to Athens. Thucydides accounts that the allies saw this as a great advantage - 'Because of their dislike for Pausanias, [the allies] were glad to see her [Athens] do so'. Yet this seems terribly ironic considering the events that followed Athens' promotion of leadership. Athens first task as leader was to assess the various forms of finance that were crucial to the league. It required a strong fleet of ships and strong funds in order to function. According to Thucydides, this management of funds was a way for them to 'compensate themselves for their losses by ravaging the territory of the King of Perisa'. ...read more.

With this intention in mind, her treatment of her allies changed dramatically in order to achieve this aim. However, her main cause for such harsh conduct was to assure that she would not be left the fight the Persian army alone, as Thucydides suggests - 'Fear of Persia was our chief motive'. Cities that did not co-operate, such as Naxos, would suffer dramatic consequences for their actions and were demoted to tribute paying states. The league had previously comprised of two different types of members, who would pay either ships or money. However, tribute payers emerged soon after the revolts of rebellious allies, possibly as a way of Athens warning her allies of the penalties of rebellion. Tribute paying states were those who had lost their independence and freedom. Although the battle of Thasos marked a potential end to the cause of the Delian League, the introduction of tribute-paying states hinted at a dramatic change in the nature of the organisation and Athens' new methods of total control. During the years 465-460 a major turning point in Athens' relationship with her allies occurred with the growth of radical democracy. These new policies caused conflict with Sparta, but this made Athens realise that it would be safer to keep her allies close in the case of a Spartan or Persian attack. Therefore she felt forced to pressurise the members of the league further. During the years 459-454 BC, the allies were required to support Athens in the pursuit of her own personal interests. As Athens had the authority to compel her allies, there is no doubt that she had transformed the aims of the Delian League into something that looked out for her own personal security rather then that of the allies as well. An example of this occurred during the war of Athens against Aegina. Athens' victory at the end of this war meant that Aegina was forced to pay thirty tributes, the largest amount any other state had been forced to pay previously. ...read more.

Upon hearing this, Sparta attempted to stand up to Athens and demanded that she treated her allies with respect, not restricting them of their independence. Yet according to Thucydides Athens showed no intentions of withdrawing the decree. It was the decision of Pericles not to withdraw the decree that gave cause for the Peloponnesian War to commence. From examining the period of 478-431 BC in depth, it is clear that Athens' treatment of her allies changed dramatically as she progressed to become leader of an empire. I believe that at first she took her role of leader seriously and intended to uphold the aims of the Delian League whilst protecting her allies. Yet as the time went by, the extreme power that she possessed began to influence her actions. After the removal of the Delian League from Delos to Athens in 454BC, I believe that her harsh treatment of the members was justified by her aims to keep a close alliance in the case of a Perisan or Spartan attack. However, her increasingly pressurising aggressiveness made her unpopular among the allies. According to Thucydides, even Pericles, a powerful and influential Athenian who had lead the siege against Samos, realised this but also appreciated the dangers of changing this tactic all together - 'Your empire is now like a tyranny: it may have been wrong to take it; it is certainly dangerous to let it go'. To this extent, it is reasonable that Athens should use such extreme measures, as it seemed to be the only way in which she could uphold her power and keep her allies close. Yet by doing so she had transformed the original aims of the Delian League entirely, which had a purpose to promote freedom and independence. In the later cases of Corinth and Megara, it was Athens unwillingness to agree on independence that triggered the Peloponnesian War. In effect, I believe that Athens had helped to end a war, onto to start another whilst in pursuit of her personal desire for imperialism. A.D. Joseph Smith - 6KM ...read more.