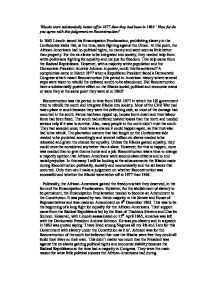 Blacks were substantially better off in 1877 than they had been in 1863.' How far do you agree with this judgement on Reconstruction? In 1863 Lincoln issued his Emancipation Proclamation, prohibiting slavery in the Confederate states

'Blacks were substantially better off in 1877 than they had been in 1863.' How far do you agree with this judgement on Reconstruction? In 1863 Lincoln issued his Emancipation Proclamation, prohibiting slavery in the Confederate states that, at the time, were fighting against the Union. At this point, the African-Americans had no political rights, no money and were seen as little better than property. For the ex-slaves to be integrated into society, they needed help from white politicians fighting for equality and not just for freedom. This help came from the Radical Republicans. However, with a majority white population and the Democratic President Andrew Johnson in power, could this be achieved? A compromise came in March 1877 when a Republican President faced a Democratic Congress which meant Reconstruction (the period in American history where several steps were taken to rebuild the defeated south) to be abandoned. Did Reconstruction have a substantially positive effect on the Blacks social, political and economic status or were they at the same point they were at in 1863? Reconstruction was the period in time from 1865-1877 in which the US government tried to rebuild the south and integrate Blacks into society. Most of the Civil War had taken place in south because they were the defending side, so most of the damage had occurred in the south. Farms had been ripped up, houses burnt down and their labour force had been freed. The south had suffered heavier losses than the north and needed serious help if it was to survive. Also, many people in the north didn't trust the south. They had seceded once; there was a chance it could happen again, so this trust also had to be rebuilt. The plantation owners that had fought on the Confederate side needed to be punished accordingly and several million ex-slaves needed to be relocated and given the chance for equality. ...read more.

Hayes faced an almost entire Democratic Congress. They were keen to end Reconstruction and the President needed Congress on his side if he was to succeed so the only thing left to do was abandon Reconstruction completely and, in the process, leaving the African-Americans entirely on their own. With the 13th Amendment now a part of the constitution, this gave Blacks a new hope. They now had the confidence and opportunity to benefit from life as best they could. What's more, the Freedman's Bureau (an institution set up to help the African-Americans make the change from slave to freedman) was set up in 1865 and provided $5 million for education. If education is available, it gives the African-American population a big step forward socially. More Black political leaders, businessmen, teachers, lawyers and doctors are nurtured and become available with the community. Also, if the African-American population learns to read and write, it gives them an advantage to passing literacy tests so that they can have the vote. Higher education colleges began to come about, most famously Howard University which opened in 1867. By 1870, most of these establishments, including Howard, were run and staffed by African-Americans. Finally the ex-slaves were gaining something good out of Reconstruction because, even though gaining the vote and equality was important, many African-Americans main priority was just to survive in life. If they could build a life whilst being segregated from the white Americans it would be far better than slavery at least! It wouldn't be ideal, but the opinion that Blacks were savage and could not be trusted in civilisation was not going to change over night. As long as the Black schools could produce more teachers who would, in turn, run further schools the African-Americans would finally have the chance to become 'civilised'. Another institution which enhanced the African-Americans socially in life was the Black Churches. They brought communities together and helped build friendships. ...read more.

The way the African-Americans would have got their land would have been through the Freedman's Bureau but it closed down in 1872. This was and economic set back as well as a social one. In conclusion, many things contributed to the advancements and the set backs of the African-Americans as they fight for equality during the Reconstruction period. However, were they substantially better off in 1877 than 1863? In my opinion, they were not. By 1877 the 13th, 14th and 15th Amendments were part of the Constitution (although nobody really stuck to what they stated), higher education schools had been opened and Black Churches were available. This had taken 13 years to accomplish. They are the only good aspects that came out of Reconstruction because any other attempt at gaining equality politically, socially and economically for the Blacks had failed mainly due to views of the African-Americans which were still indifferent to what they had been in 1863. I have always maintained the opinion that to change a way of life permanently, you need to change the attitudes of the people involved. Many white Americans still believed African-Americans to be second class to them and terrorists groups like the Ku Klux Klan were evidence of blatant racial attack. For all of the African-Americans suffering during these 13 years of supposed Reconstruction, they have gained three Amendments which are, admittedly, always going to be part of the Constitution so the Blacks can use them if needs be. However, many states failed to ratify the 14th and 15th Amendments and found ways around them in the form of voting qualifications. The Blacks had their own churches which they set up themselves without any help from Reconstruction but these still showed the signs of segregation. The same goes for the Black schools. The African-Americans were constantly being segregated even though the main aim of Reconstruction was to 'integrate them into society'. For this reason I believe Reconstruction to be a failure and think that the real fight for equality begins in 1877, when the African-Americans do not have a Republican Government supporting them. ...read more.