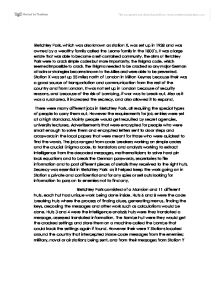 Bletchley Park, which was also known as station X, was set up in 1938 and was owned by a wealthy family called the Leone family in the 1800`s. It was a large estate that was able to become a self-contained community. The aims of Bletchley Park were to crack simple codes but more importantly, the Enigma code, which seemed impossible to crack. The Enigma needed to be cracked so any major German attacks or strategies became known to the Allies and were able to be prevented. Station X was set up 55 miles north of London in Milton Keynes because their was a good source of transportation and communication from the rest of the country and from London. It was not set up in London because of security reasons, and because of the risk of bombing, if war was to break out. Also as it was a rural area, it increased the secrecy, and also allowed it to expand. ...read more.

Bletchley Park consisted of a Mansion and 11 different huts, each hut had unique work being done inside. Huts 6 and 8 were the code breaking huts where the process of finding clues, generating menus, finding the keys, decoding the messages and other work such as calculations would be done. Huts 3 and 4 were the intelligence analysis huts were they translated a message, assessed translated information. The Bombe hut were they would get the cracked settings and store them on a machine called the bombe that could track the settings again if found. However their were Y Stations located around the country that intercepted Morse code messages from the enemies; military, naval or air stations being sent, and from their messages from Station Y were written down on paper and sent to Station X by dispatch riders who were mainly women at the time but as time went on their were teleprinters. ...read more.

In conclusion they are many reasons that contribute to why Bletchley Park was set up such as the British invading enemy tactics by Bletchley Park and speeding up the attack rates so the war would be easier. But I personally believe that the most important reason why it was set up is because Britain wanted to beat Germany and one of the best German tactics was the enigma which allowed them to get a step forward in winning the war, Britain wanted to defeat Germany but the enigma was a problem. Some evidence to support this statement from John Tiltman, a Colonel in the King's Own Scottish Borderers (Army) in June 14 1949, which said "the Germans were one step forward they believed their little toy was incredible to pass on encrypted messages but they never knew about Bletchley Park". Also some evidence to support this statement from the Prime Minister Winston Churchill in November 1947 "The Germans are heavily prepared, but we are a match for them as our technology is advancing, and the battles are fading quick." ...read more.