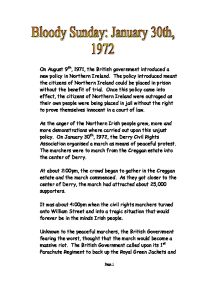 On August 9th, 1971, the British government introduced a new policy in Northern Ireland. The policy introduced meant the citizens of Northern Ireland could be placed in prison without the benefit of trial. Once this policy came into effect, the citizens of Northern Ireland were outraged as their own people were being placed in jail without the right to prove themselves innocent in a court of law. As the anger of the Northern Irish people grew, more and more demonstrations where carried out upon this unjust policy. On January 30th, 1972, the Derry Civil Rights Association organised a march as means of peaceful protest. The marchers were to march from the Creggan estate into the center of Derry. ...read more.

They thought to them selves, what is the British army doing here, and why are they so heavily armed? At that moment, there was a shot fired at a church, where British soilders were positioned. The Parachute Regiment said they believed the shot originated from the Glenfada Park area, so they fired rounds in that direction, wounding two civilians. The people began to panic as the British fired upon them and what the British Soldiers fired upon them and what the British had initially feared became reality due to their own stupidity. The marchers began to riot as the paratroopers were ordered to move in and make arrests. Ten Regimental armored vehicles moved into Rossville flats, there were seven more British shots fired. ...read more.

The fourteenth victim died as a result of complications caused by the shooting. Dr. Edward Daly (later Bishop of Derry) said he did not believe the 1st Parachute Regiment was under fire. He stated, "Even if there were shots, I do not think that what the paratroopers did was humane. I believe it was murder". On Bloody Sunday Dr. Daly gave the last rights to a seventeen-year-old, who was shot in a parking lot near Rossville flats. In the days and weeks after the tragic event of Bloody Sunday occurred, many Irish people some as young as seventeen signed up to become apart of the IRA. They thought by doing this, they would one day get their revenge on the British Army, for the devastation they caused on their families and to the families of many others. Page 1 ...read more.