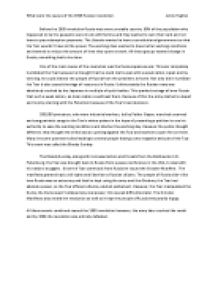 Causes of the 1905 Russian revolution

﻿What were the causes of the 1905 Russian revolution. Jenny Hughes Before the 1905 revolution Russia was a very unstable country. 80% of the population who happened to be the peasants were struck with famine and they wanted to own their land and not have to pay redemption payments. The Liberals wanted to have a constitutional government so that the Tsar wouldn?t have all the power. The working class wanted to have better working conditions and wanted to reduce the amount of time they spent at work. ...read more.

Unfortunately the Russian navy was absolutely crushed by the Japanese in multiple of quick battles. This sparked outrage all over Russia that such a weak nation, an Asian nation could beat them. Because of this the army started to depart and mutiny starting with the Potemkin because of the Tsar?s bad decisions. 200,000 protesters, who were industrial workers, led by Father Gapon, marched unarmed and sang patriotic songs to the Tsar?s winter palace in the hope of presenting a petition to use his authority to ease the working conditions and shorten the working day. ...read more.

Once the Tsar came back from Russia he issued the October Manifest. The manifesto granted basic civil rights and liberties to Russian citizens. The people of Russia didn?t like how Russia was an autocracy and that he kept using the army and the Okrahna, the Tsar had absolute power, so the Tsar offered a Duma, elected parliament. However, the Tsar manipulated the Duma, the Duma wasn?t allowed any real power, this caused difficulties later. The October Manifesto also ended the revolution as well as it kept the people of Russia temporarily happy. All these events combined caused the 1905 revolution however, the army later crushed the revolt and by 1906 the revolution was entirely defeated. ...read more.