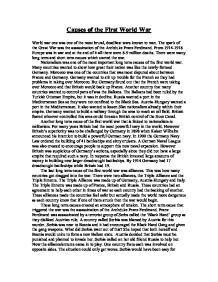 Causes of the First World War World war one was one of the most brutal, deadliest wars known to man. The spark of the Great War was the assassination of the Archduke Franz Ferdinand. From 1914-1918 Europe was in war and at the end of it all there were 8-9 million deaths. There were many long term and short term causes which started the war. Nationalism was one of the most important long term causes of the first world war. Many countries wanted to show how great their nation was like the newly-formed Germany. Morocco was one of the countries that was most disputed about between France and Germany. Germany wanted to stir up trouble for the French so they had problems in taking over Morocco. But Germany found out that the French were taking over Morocco and that Britain would back up France. Another country that many countries wanted to control parts of was the Balkans. The Balkans had been ruled by the Turkish Ottoman Empire, but it was in decline. ...read more.

The last long term cause of the first world war was alliances. This was how many countries got dragged into the war. There were two alliances, the Triple Alliance and the Triple Entente. The Triple Alliance was made up of Germany, Austria-Hungary and Italy. The Triple Entente was made up of France, Britain and Russia. These countries had an agreement to help each other in times of war so each country had the backing of another. These alliances made the countries feel safer but actually made the world more dangerous as each country knew that if one of them struck then the war would begin. These long term causes created an atmosphere of tension. The short term cause that triggered the war was the assassination of the Archduke Franz Ferdinand. Franz Ferdinand was assassinated by a terrorist group of Serbs called the 'Black Hand' group as they disliked Austrian rule. A country called Serbia was blamed by Austria for this murder. Serbia was near to Bosnia and it had encouraged the Black Hand Gang and given the gang weapons. ...read more.

But it had one problem. It relied on what the French or Russians did and the actions of one would provoke a German response and not the other way round. In other words, the Germans had to react to a situation as opposed to controlling it. When the French called up her army, the Germans had no choice but to carry out the Schlieffen Plan - it had to. This plan involved an attack on France via Belgium which is flat land. For the Schlieffen Plan to be successful, they had to invade France quickly. The last short term cause was the Treaty of London between Belgium and Great Britain. G.B. had an agreement with Belgium to protect it since 1839. Germany did not think G.B. would obey this old treaty. But G.B. was also worried that if they do not join, Germany would beat France and be very powerful. This was how Belgium and G.B. got dragged into the war. Now it was Germany and Austria-Hungary vs Serbia, Russia, France, Belgium and GB. But Germany still invaded France through Belgium and the war started and raged on until 1918. ...read more.