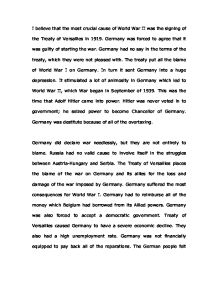 I believe that the most crucial cause of World War II was the signing of the Treaty of Versailles in 1919. Germany was forced to agree that it was guilty of starting the war. Germany had no say in the terms of the treaty, which they were not pleased with. The treaty put all the blame of World War I on Germany. In turn it sent Germany into a huge depression. It stimulated a lot of animosity in Germany which led to World War II, which War began in September of 1939. This was the time that Adolf Hitler came into power. Hitler was never voted in to government; he seized power to become Chancellor of Germany. ...read more.

It promoted anti-democratic, liberal and communist governments. This was in opposition to all American, Soviet and French influences on Germany. The Treaty of Versailles brought about an anti-allies attitude in the German population. This attitude blazed a trail for the new Nazi Germany and the start of World War II. In conclusion, the Treaty of Versailles greatly contributed to the outbreak of World War II. Germany was forced to adopt a democratic government and accept all blame for World War I. This allowed Adolph Hitler to take control and play on the emotions of a distraught nation. Germany was impoverished from over taxing and Hitler's promises appealed to them. All of the elements of the Treaty of Versailles subsequently caused a depression in Germany paved a trail for Hitler to begin a new war. ...read more.