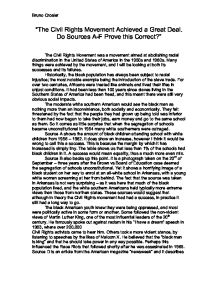 "The Civil Rights Movement Achieved a Great Deal. Do Sources A-F Prove this Correct?" The Civil Rights Movement was a movement aimed at abolishing racial discrimination in the United States of America in the 1950s and 1960s. Many things were achieved by the movement, and I will be looking at both its successes and its failures. Historically, the black population has always been subject to racial injustice; the most notable example being the introduction of the slave trade. For over two centuries, Africans were treated like animals and lived their lifes in unjust conditions. It had been less than 100 years since slaves living in the Southern States of America had been freed, and this meant there were still very obvious social impacts. The moderate white southern American would see the black man as nothing more than an inconvinience, both socially and economically. They felt threatened by the fact that the people they had grown up being told was inferior to them had now begun to take their jobs, earn money and go to the same school as them. ...read more.

Others took a more violent stance, by listening to speeches by the likes of Malcom X. He believed that the "black man is king" and that he should take power in any way possible. Perhaps this influenced the Race Riots that followed shortly after he was assasinated in 1965. Source D is an article from the American magazine "newsweek" and it describes a conversation between some black youths. In my opinion the source definitely has some bias; as it refers to them as "long legs" and "gangly". It seems to portray them as delinquents and criminals, for example "those buildings goin' up was a pretty sight". And some may argue that it is not an unfair portrayal, as it was in fact black youths that started the Race Riots - but I think it is important to understand that they did so out of sheer frustration of not being treated as equals. I think they were sick of waiting for non-violent protestors and decided to take matters in to their own hands, as we can see from the quote "my kids are goin' to study about that in school, and they'll know their old man was part of it." ...read more.

In my opinion is that it is fair to say that the Civil Rights movement had some successes, with some failures. I think sources A - F do not show that the movement achieved a 'great deal' so to speak, but it would be wrong to dismiss it, as there were definitely several victories. Sources A, B and D in particular show things that could have been improved. And I think the thing that links all three of them together is the fact that they were all social problems, so perhaps the biggest obstacle for the Civil Rights activists was to try and bridge the gap between black and white people, which sadly still exists to some extent even to this day. Moreover, I feel that one of the greatest flaws of the Civil Rights Movement was that the black community should have stuck together. The fact that there were disagreements between violent and non-violent protestors only weakened their case for equality. So in conclusion, I think that sources A - F only partially back up the notion that "The Civil Rights Movement Achieved a Great Deal", because some of the sources in fact show the failures. ?? ?? ?? ?? Bruno Crosier ...read more.