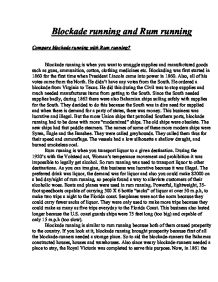 Blockade running and Rum running Compare blockade running with Rum running? Blockade running is when you want to smuggle supplies and manufactured goods such as guns, ammunition, cotton, clothing medicines etc. Blockading was first started in 1860 for the first time when President Lincoln came into power in 1860. Also, all of his votes came from the North. He didn't have any votes from the South. He ordered a blockade from Virginia to Texas. He did this during the Civil was to stop supplies and much needed manufactures items from getting to the South. Since the South needed supplies badly, during 1862 there were also Bahamian ships sailing safely with supplies for the South. They decided to do this because the South was in dire need for supplied and when there is demand for a party of states, there was money. This business was lucrative and illegal. But the more Union ships that patrolled Southern ports, blockade running had to be done with more "modernized" ships. The old ships were obsolete. The new ships had fast paddle steamers. The names of some of these more modern ships were Syren, Eagle and the Banshee. ...read more.

Government, charging an import duty of 12 schillings on every case of liquor, quickly paid off the public debt of �69,000 and went on to make over �1,000,000 a year between 1926 and 1930. Also a casino and a golf course were opened on West Bay Street. Also in 1922 the Colonial Hotel was built, the Fort Montagu Beach Hotel and Prince George Dock. Electricity plant was enlarged and city water and sewage systems were installed. Another similarity between rum running and blockade running is that they all resulted in depression and poverty. Rum running ended because of a number of reasons. Americans were feeling the effects of the Wall Street crash. Most of them lost their money. In the Bahamas the Bahamas was hit by a devastating hurricane. All these events caused money to be scarce and since money was scarce, you could say that the alcoholics were forced to be sober because they had no money to be alcoholics with. Blockade running resulted in a similar fashion. When the war stopped, there was no more need for blockade-runners. When there was no more need for blockade-runners and storage, the streets of Bay Street became scarce once again. ...read more.

Also on the positive side, Rum running also brought prosperity to the Bahamas. Since the Government put twelve schillings on the import of every case of liquor, the Bahamas quickly became prosperous. This duty quickly vanquished the Bahamas' debt and also caused the Bahamas to make 1,000,000 pounds a year between 1926 and 1930. Also, a casino and a golf course, Fort Montagu were erected with some of the money. But, on the negative side, Blockade Running also brought depression and poverty. When the war ended with the surrender of Confederates forces on April 8th, 1865, the need for blockade running ceased. The harbour, warehouses, shops and hotels soon became deserted; the boom was over. Also at the end of the war, many Bahamians died, some of yellow fever (which was carried by mosquitoes), other by Typhoid fever (from drinking polluted water). Rum running also had a negative side. Rum running also caused a great depression and poverty. Also, all the money the American rumrunners made was put in the banks. But in 1929 all they saved was lost in an event called the " Wall Street Crash". But In 1933, every rumrunners dream not to come true came true. In 1933, the National Prohibition was repealed. Meaning that liquor was now legal to be sold, promoted etc. SO the art of rum running was now phased out. ...read more.