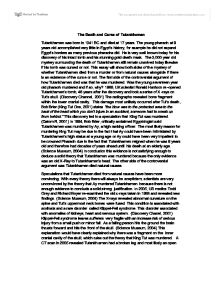 Death and Curse of Tutankhamun

The Death and Curse of Tutankhamen Tutankhamen was born in 1341 BC and died at 17 years. The young pharaoh at 9 years old accomplished very little in Egypt's history, for example he did not expand Egypt's borders as many previous pharaohs did. He is very well known today for his discovery of his intact tomb and his stunning gold death mask. The 3,000 year old mystery surrounding the death of Tutankhamen still remain unsolved today likewise if his tomb was cursed or not. This essay will show both sides of the mystery of whether Tutankhamen died from a murder or from natural causes alongside if there is an existence of the curse or not. The first side of the controversial argument of how Tutankhamen died was that he was murdered. Was the young seventeen year old pharaoh murdered and if so, why? 1968, UK scientist Ronald Harrison re-opened Tutankhamen's tomb, 46 years after the discovery and took a series of X-rays on Tut's skull. (Discovery Channel, 2001) The radiographs revealed bone fragment within the lower cranial cavity. This damage most unlikely occurred after Tut's death, Bob Brier (King Tut One, 2001) ...read more.

The theory that a curse has been summoned by Tutankhamen's tomb has often been treated jokingly and there is more information to support the theory of a curse not existing. A curse is the opposite of a blessing. An assertion of good fortune is a blessing where on the other hand a curse is the assertion of ill fortune. (About, 2001) Before the legendary discovery of Tutankhamen in November 1922, Howard Carter bought a yellow canary in Egypt to bring joyfulness to him when he's at home with its happy harmonizing. His servant said, "It's a bird of gold that will bring luck ... we'll find a tomb full of gold" On the next day, Howard Carter discovered a flight of 16 descended steps under the tomb of Ramesses VI (KV9). Howard Carter did not precede into the chamber until Lord Carnarvon the funder, arrived. Lord Carnarvon arrived and novelist Mari Corelli published a warning about deathly consequences of who dares to disturb the tomb. (Dayly H, 2000) Tutankhamen's sarcophagus was discovered on the 4th of May 1922. The team descended down and set in the burial chamber where gold shrines surrounding them and a sarcophagus in the centre. ...read more.

(Discovery Channel, 2001) The evidence is a lot more persuasive and understanding than the theory that a curse existed, a compelling example is that that the majority of people at present of the opening lived to the life expectancy. The ancient mystery surrounding the death of Tutankhamen still remains unsolved today likewise if his tomb was cursed or not. It was concluded that Tutankhamen died of natural causes; he had Klippel-Feil Syndrome which made sufferers injure more extensively and Tutankhamen died from gangrene from a broken leg that got infected. It was also decided that there was no existence of a curse. The only evidence that shows a curse did exist was that Lord Carnarvon died within weeks after the opening and after Mari Corelli published to the newspapers, a warning that there will be deathly consequences for those who disturb the tomb. Whereas the theory for that a curse didn't exist was that 20 out of the 26 people who entered the tomb survived on average till the life expectancy of 65 years. Howard Carter, who the curse should have laid squarely on, lived for decades until his death at 66 years old. In conclusion, it was decided that King Tutankhamen died of natural causes and there was no existence of a curse. ...read more.