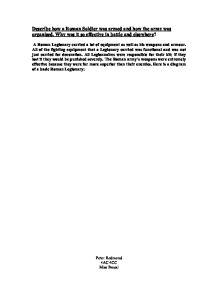 Describe how a Roman Soldier was armed and how the army was organised - Why was it so effective in battle and elsewhere?

Describe how a Roman Soldier was armed and how the army was organised. Why was it so effective in battle and elsewhere? A Roman Legionary carried a lot of equipment as well as his weapons and armour. All of the fighting equipment that a Legionary carried was functional and was not just carried for decoration. All Legionnaires were responsible for their kit; if they lost it they would be punished severely. The Roman army's weapons were extremely effective because they were far more superior than their enemies. Here is a diagram of a basic Roman Legionary: The Helmet The helmet was made out of metal probably iron of bronze which are strong durable metals. It was a tight fit to provide more protection. This type of helmet was introduced because of the weapons the army faced during battle. The cheek pieces were hinged to allow for manoeuvrability and there was a 'lip' at he back to protect the neck from the sun and the rain. The chin piece was tied down very tightly with strings. There was also a leather skull cap on the inside of the helmet to provide comfort. There was also a rim at the front to reinforce the helmet and to protect the soldier's from the sun. ...read more.

The Legions were then divided up into ten cohorts; nine of these had 480 men and one which was called the First Cohort and 1000 men. This included five double centuries, extra administration staff and 120 cavalry soldiers. The First Cohort was the senior cohort of the legion. The cohorts were broken down into six centuries, one of which consisted of eighty men; the century was the essential fighting unit of the legion. The centuries were divided even further into ten contubernia, one of which, a contubernium, consisted of eight men. These eight men lived together in a barracks or a tent and developed close friendships which helped them in battle because they would be fighting for each other. The person in charge of the whole legion was the Legate and he was assisted by six tribunes. A century was commanded by a centurion. The First Cohort had an extra centurion called the Primus Pilus who was the chief centurion of the legion. Each centurion was assisted by an Optio. Also there were auxiliary troops who were not Roman citizens and they brought skills such as archery to the army. They also made up part of the Roman army. There were also Numeri who were barbarians and they were often sent into battle first to tire the enemy. ...read more.

Probably the most important reason why the Roman army was so effective was because of the strict discipline that the army had. For example the centurions carried around a staff made out of vine wood and it was used to beat disobedient soldiers with. Also if a soldier had a small, silly fault like dirty armour then he would be made to stand outside headquarters with no weapons and armour. This was to show that he wasn't worthy of being a soldier. A more serious punishment was that if a unit disgraced itself then it would be decimated which meant that one man in every ten would be clubbed or stoned to death by the rest of the army. The place where the army was probably most effective apart from battle was sieges this was mainly because of the superior siege technology the Romans had including catapults and siege towers. Over the page are some diagrams and labels of some siege technology that the Romans built: Therefore the reasons why the Roman army was so effective in battle and elsewhere are because they had the most advanced technology of their time, their tactics and their weapons were unmatched. The strict discipline and the rigorous training made the army what it was and this helped the Romans conquer as much of the known world as they did. Peter Redmond 4AC 4CC Miss Pascal ...read more.