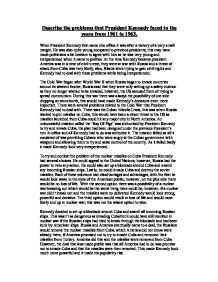 Describe the problems that President Kennedy faced in the years from 1961 to 1963. When President Kennedy first came into office it was after a victory of a very small margin. He was also quite young compared to previous presidents; this may have made politicians a bit hesitant to agree with him as he was very young and inexperienced when it came to politics. At the time Kennedy became president America was in a time of civil unrest, they were at war with Russia and a threat of attack from Cuba was very likely, also, Blacks were trying to gain civil rights and Kennedy had to deal with these problems while being inexperienced. The Cold War began after World War II when Russia began to invade countries around its western border, Russia said that they were only setting up a safety cushion as they no longer wished to be invaded, however, the US accused them of trying to spread communism. During this war there was always the possibility of one side dropping an atom bomb, this would have made Kennedy's decisions even more important. There were several problems related to the Cold War that President Kennedy had to deal with. There was the Cuban Missile Crisis, this was when Russia wanted to put missiles on Cuba, this would have been a direct threat to the US as missiles launched from Cuba could hit any major city in North America. ...read more.

Berlin was also a trouble spot during the Cold War, half was controlled by Russia and the other half was controlled by the US, Britain and France. The East side was communist and the West side was Capitalist. The Eastern Berliners were jealous of the prosperous life of West Berliners; they had freedom of speech, could go out to a variety of American shops and were able to watch Western television. Russia decided that they wanted to control all of Berlin as it was essentially in East Germany which they were in control of. Kennedy refused to give them all of Berlin saying that "all Europe is at stake in West Berlin". Late in 1961 Russia set up a large wall dividing East and West Berlin, this stopped people fleeing the communist East Berlin in search of a more prosperous life in the West. Russia continued to argue that they should have full control of Berlin; sometimes it looked like they may have invaded West Berlin which may have resulted in a full scale nuclear war. Eventually Russia realised that Kennedy was not going to budge and gave up any hopes of seizing control of West Berlin, this made Kennedy look like he had scored an important and decisive victory over the communist Russians. The US strongly believed in a theory named the domino theory - that as one country fell to communism then the countries surrounding it would also become communist. ...read more.

He did manage to get some bills passed such as an increased social security bill, training schemes for the unemployed and housing programmes. As Kennedy was trying to help the minorities he did gain some support, although he was not making very much progress at all, this once again highlighted his inexperience. It was not entirely his fault that some of the bills wee rejected, quite a lot of the members of congress were Southern racists who were also anti-catholic, which was bad for Kennedy as he was a Catholic. This meant that any bill that may have helped blacks in some way was voted against by all of the southern racist politicians; this was because they still believed that blacks were inferior to whites and should not have equal rights. So Kennedy was gaining support for trying to improve things for minorities he was not actually getting much done, however, he did pave the way for the presidents that came after him to continue his work and to eventually get blacks equal rights and rights in practice. He was also unsuccessful in finding a way to stop poverty in America. In conclusion, President Kennedy had to face many problems during his time as president, he had to deal with the Clod War and the Black Civil Rights Movement all while being criticised for being inexperienced, which several of his decisions showed he clearly was. ?? ?? ?? ?? ...read more.