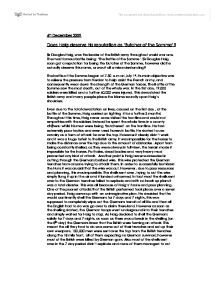 Did Haig deserve his reputation

4th December 2009 Does Haig deserve his reputation as 'Butcher of the Somme'? Sir Douglas Haig, was the leader of the British army throughout world war one. The most famous battle being: 'The Battle of the Somme'. Sir Douglas Haig soon got a reputation for being the butcher of the Somme, however did he actually deserve this name, or was it all a misunderstanding? The battle of the Somme began at 7.30 a.m on July 1st. Its main objective was to relieve the pressure from Verdan to help assist the French army, and consequently wear down the strength of the German forces. The Battle of the Somme saw the most death, out of the whole war. In the first day, 19,000 soldiers were killed and a further 60,000 were injured. This devastated the British army and many people place the blame soundly upon Haig's shoulders. Even due to the total devastation on lives, caused on the first day, of the battle of the Somme, Haig carried on fighting it for a further 5 months! Throughout this time, Haig never once visited the frontline and could not empathise with the soldiers. Instead he spent the whole time in a county ch�teau whilst his men were being 'butchered' on the frontline. He had extremely poor tactics and even used horses in battle. He started to use cavalry as a form of attack for over the top. ...read more.

This made a lot of people wonder, is he the correct person to be in charge of the British army if people are too afraid to tell him what is really going on in the war he is meant to be leading? A final point to make about Haig, he didn't once consider a change of tactics. Even the government were getting concerned about him. Throughout all the life loss, and devastation to the British army, he never considered a different approach. In source 3 'French soil criticise the cost of the way he did without offering alternative methods.' This source proves my point, and I do believe that it can be trusted, as out of the three sources this is the only one that creates a balanced argument and is not biased in any way. Earlier in this source it also mentions that Haig did not consider his soldiers' moral. However, I also feel that Haig was not as bad as some people suggest. For example, this was the first case of French warfare in trenches. And so he had no battles to look upon for ideas, he could not see the mistakes that other wars had caused and built off those, instead he had to come up with all the methods himself. He also had no other alternatives to sending his men over the top. ...read more.

Haig was an experienced soldier and there was never as much life loss as with the French, this suggests that Haig was a better leader than the leader of the French army. Every person in Britain at the time knew of someone who had died, this could have been there granddad, son, brother or uncle. The moral in the UK was extremely low. As Haig was the leader of the British army, he was often used as a scape goat, and the people of Britain needed someone to blame for their loss. Ultimately, the British won the war. And Haig was the leader of their army, so Haig should get the credit for it. Although there was a huge amount of devastation, the war was won and objectives were met. Future wars can learn from the mistakes of Haig and for the first war fought in trenches, I feel that Haig did a good job. There are many points for and against Sir Douglas Haig being the butcher of the Somme. However as I have been to the many battle fields of Flanders and seen the devastation and number of lives for myself I feel that Haig's reputation for being the 'butcher of the Somme' is deserved. The loss of life was huge, and he didn't consider trying to reduce it. Although the British did win the war in the end, it was not due to fighting, but cutting off the Germans food supply. This means that 'over the top' 'shelling' and constant death, which Haig promoted, was not necessary. ...read more.