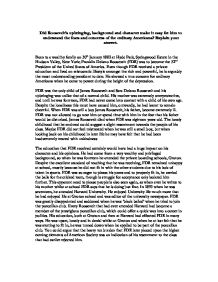 Did Roosevelts upbringing, background and character make it easy for him to understand the fears and concerns of the ordinary Americans?

Did Roosevelt's upbringing, background and character make it easy for him to understand the fears and concerns of the ordinary Americans? Explain your answer. Born to a wealthy family on 30th January 1882 at Hyde Park, Springwood Estate in the Hudson Valley, New York; Franklin Delano Roosevelt (FDR) was to become the 32nd President of the United States of America. Even though FDR received a private education and lived an aristocratic lifestyle amongst the rich and powerful, he is arguably the most understanding president to date. He showed a true concern for ordinary Americans when he came to power during the height of the depression. FDR was the only child of James Roosevelt and Sara Delano Roosevelt and his upbringing was unlike that of a normal child. His mother was extremely overprotective, and until he was fourteen, FDR had never come into contact with a child of his own age. Despite the loneliness this must have caused him, outwardly, he had learnt to remain cheerful. When FDR was still a boy James Roosevelt, his father, became extremely ill. FDR was not allowed to go near him or spend time with him in the fear that his father would be disturbed. James Roosevelt died when FDR was eighteen years old. The lonely childhood that he endured could suggest a slight resentment towards the people of his class. ...read more.

FDR had also married his distant relative Eleanor Roosevelt in 1905 who was Theodore Roosevelt's favourite niece. In 1910, at the age of twenty eight, FDR was elected to the New York Senate. He was the first democrat in thirty two years to be elected in that district and became well known in Washington and also for his support of Woodrow Wilson. In 1913 FDR took over the position of assistant secretary to the Navy, a job he had long been aiming for. FDR was excellent at his job but restless and arrogant as an assistant, and did not bother to hide the fact that he believed he would go far. He was however, hard working and efficient and by 1920 he had resigned and was campaigning to become Vice President. FDR gave countless speeches all over the USA and found that he was a dynamic public speaker who was able to communicate with the people. Even though FDR lost the campaign, he managed to get a lot of publicity which could have been helpful at a later date. FDR entering the political world may not have helped him understand the needs of the public but it did prove his determination and desire to please and succeed in everything that he did. The tenacity in FDRs character would enable him to pursue his goals in helping ordinary Americans without being hindered by the social expectations of the time. ...read more.

If he fell, his political career would be over, however he did not fall, and the speech was a huge success and viewed a sort of come back after his many years of recovery. He was elected Governor of New York State in 1928 and just a year after he was elected, the Wall Street crash happened. The whole country fell into economic depression as so much of peoples social wellbeing depended on the stock market. The Republican government, who were in power, were not pro-active in their approach to the crisis, believing that the economy would straighten itself out. Eventually, the government would set up schemes to help those who had nothing at all, by providing clothes, food and shelter. FDR responded to the crisis very differently and showed that he understood the fears and concerns of the people. So it was not very surprising, after the success he had had in New York State, that he stood for, and won the presidency in 1932. In conclusion, through FDRs upbringing, background and character, he could understand the fears and concerns of the American public. The biggest contributor however, was when he caught polio. Without polio he would never have been able to understand and empathise with ordinary people and the disadvantaged. This empathy that he felt, was unusual for somebody of his class and background and without this he would not have gone down in history as one of the greatest presidents ever, or may never have made it to the presidency at all. ...read more.