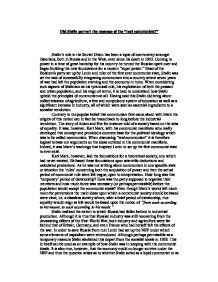 Did Stalin pervert the message of the &quot;real communists?&quot;

Did Stalin pervert the message of the "real communists?" Stalin's role in the Soviet Union has been a topic of controversy amongst historians, both in Russia and in the West, ever since his death in 1953. Coming to power in a time of great hardship for his country he turned the Russian spirit over and began building the new foundations for a modern "super power." Head of the Bolshevik party set up by Lenin and ruler of the first ever communist state, Stalin was set the task of successfully integrating communism into a country where seven years of war had left the population starving and the economy in ruins. When considering such aspects of Stalinism as his tyrannical rule, his exploitation of both the peasant and urban population, and his reign of terror, it is hard to understand how Stalin upheld the principles of communism at all. Having said this Stalin did bring about collectivisation of agriculture, a free and compulsory system of education as well as a significant increase in industry, all of which were seen as essential ingredients to a socialist revolution. Contrary to the popular belief that communism first came about with Marx the origins of this notion can in fact be traced back to long before the industrial revolution. The story of Adam and Eve for instance told of a society based on the idea of equality. It was, however, Karl Marx, with his communist manifesto who really developed this concept and provided a concrete base for the political ideology which was to be called communism. When discussing "real communism" it is therefore logical to base our arguments on the ideas outlined in the communist manifesto. ...read more.

The communities that existed within these farms were thus based on a communist mentality where everyone would work together for a common goal. People pooled together their equipment, crops, livestock, and technology, carrying out the abolition of private property which Marx said "summed up the theory of the communists in a single sentence." (Communist manifesto) Theoretically, collectivisation was therefore in full accordance with true communism. This revolutionary method of farming was put in place at a phenomenal pace, by 1937, 90% of all farmland had been collectivised. Stalin did also abolish all free markets in grain by 1929 which was undeniably in keeping with true communism. Collectivisation also provided the promise of a classless society. Under the NEP, a wealthier class of peasants had been born, these peasants were called Kulaks. Stalin used this class as a scapegoat for agricultural failure and then for the initial disaster brought about through collectivisation. He proceeded to wipe out this entire class of peasants who he saw as a threat to communism, around 10 million were deported, killed, or put into labour camps. These ruthless methods succeeded in eliminating the hierarchy that existed in rural areas yet failed to show any respect for the dignity of human life, a concept which true communism obviously upheld. The kulaks were by no means the only ones to suffer from the five year plans. In the towns, workers were forced to work long hours for ridiculously low wages. Ironically, their living conditions were often unbearable. Marx had, on many occasions, denounced the deplorable living conditions of the workers of the industrial revolution and now that communism had been put in place, the conditions were as bad if not worse than under capitalism. ...read more.

The rate of literacy soared under Stalin's rule as education was made free and compulsory and adults were taught how to read and write. Marx had promised "Free education for all children in public schools" in his communist manifesto and that is what the Russians received. Stalin also upheld Marx's view of religion as he rejected it, yet replaced it with his personality cult. So it is true that, to some degree Stalin abided by Marx's ideal of communism in his attempt to create a classless society and implement a planned economy. Despite certain advantages that his rule may have brought, the sheer exploitation of the people, coupled with his reign of terror and self-portrayal as a God, created a society which by no means compare to the "paradise" Marx predicted. Many historians, such as Roy Medeven, for example, reject the argument that Stalinism abided by communist ideals altogether and give him "no credit at all." The fact that the period under Lenin's rule is now called Marxist-Leninism and that the period under Stalin's rule is simply called Stalinism, gives us a solid indication that Stalin did not abide by the message of the true communists. As Norman Lowe states, "Instead of Marxism, dictatorship of the proletariat, there was merely Stalinism and dictatorship of Stalin." Some argue, however, that the blame for this failure does not lie with Stalin, but with the ideal of communism that is believed to be impossible to implement successfully. This theory holds some weight when one takes the example of any other attempt at communist rule. Whether it be in China under Mao, or Cambodia under Pol Pot, no regime has ever honoured Marx's idea of communism in its purest form. The fact is that where there has been a revolution the Marxist ideology has been hijacked by the eternal human thirst for power. ...read more.